The last few weeks I have consciously taken time to ask friends and family about what they plan on doing or getting for their kids for Christmas. I have asked about the type of toys they go for (if they get them) or if they go for a one off large gift? Do they get Clothing, books, dress up? Is there a theme they follow or do they have traditions they keep? And the biggy – how much say the kids get or is it solely the parents choosing? Its not to be nosey or for any level of comparison, but rather just pure interest in how those closest to us choose to give gifts to their kids at Christmas time.

It may be odd research to conduct, yes, but I am fairly new to parenting (only 5 years in) and no where near done having my kids and so I want to know that we are starting out on the right footing and getting the right level of excitement and anticipation alongside the true meaning and loveliness of the season… As I pondered on their various answers, I came to realise that I wasn’t in actual fact happy with aspects of our gift giving and was certainly in search of a new way to approach it. At the time I didn’t know what it was, but after several of these Christmas conversations with various people, I came to realise that Christmas was making me quite anxious and what we were heading towards was making me uneasy, particularly with what tone we wanted to set for our kids regarding gifts and the spirit of the season.

If you have followed my blog for a while or know me personally then you may remember that last year I chose the path of “Want, Need, Wear, Read“, which was the result of similar feelings of not wanting to spoil my kids and wanting them to be appreciative and also to encourage them to think of the difference between a want and a need. This year however, not only have I found it quite restrictive, I also feel it doesn’t teach them about the true meaning of the season (that is about giving & others) which is our personal priority as parents. 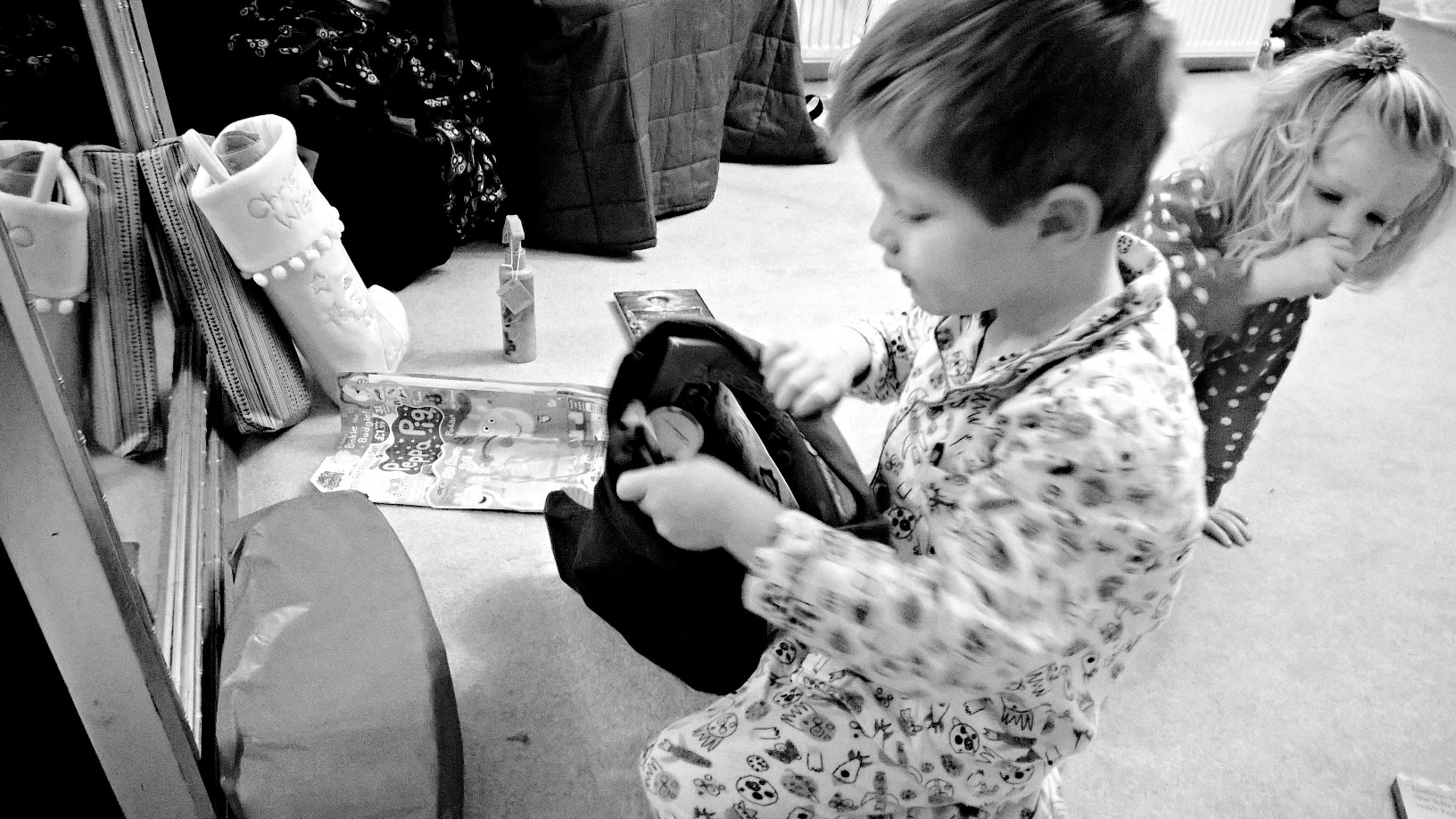 The way our kids have been approaching it has been rather obscene really, and the amount of “I wants” out of their mouths at only 3 and 5 years old really worries me… A LOT! I guess a lot of it is down to us and how in previous years we have bought them a lot of what they asked for and so they have come to associate that connection of wanting and getting…the rest probably from adverts and chat from the other kids – either way I am certain that this isn’t the tone I want to ever approach Christmas with in my home and if I can I wish to change it as soon as possible.
As I have chatted to other parents and the family the one thing that I have realised is that I have been really very wrong in what I have perceived as suitable Christmas gifts!! I’ve always thought it was a good idea to buy them an array of toys around whatever they were into, and just shower them with the “wow factor” of delights under the tree. But since have realised a valuable lesson in that this plastic tat is not only annoying, easily broken and soon looses their interest, but it doesn’t last and it creates little wanting monsters (something I had to learn for myself through experience)! This isn’t to say I won’t buy them one toy that they would love, that quite possibly is plastic or battery operated, and I also strongly believe birthdays are a time for them to have these things and get toys and tat that they are into, because that’s THEIR day, but for Christmas? Well I want them to receive more thoughtful things that are long lasting and don’t clutter up the home! 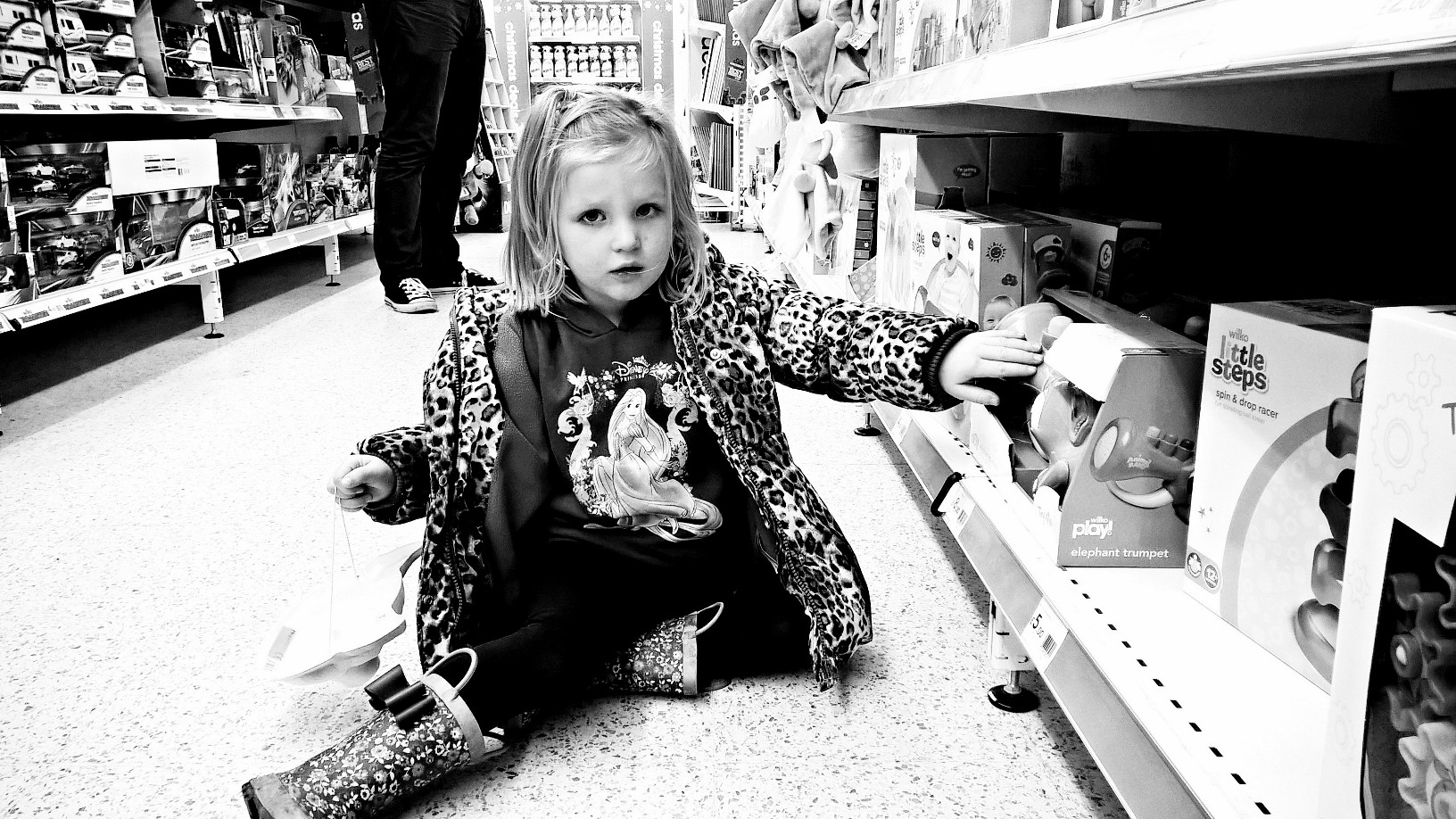 I feel that Christmas really isn’t about us at all nor is it about what we want or what we need even, but rather it is about something/someone far greater and it is so much more about giving…giving of ourselves, our time, charity and gifts that we feel another would love. Wish lists are fine, of course they are, why not put it out there what you would love, but asking and wanting and writing letters requesting stuff I think creates an element of self absorption! You only have to watch the Ikea advert that seems to be circling the net recently to see that kids do not need, nor even particularly really want everything they say they do, or that we choose to throw at them, but rather they treasure the things that encourage us all to play together, to spend time together, experiences that build memories and the things that expand their passions and learning. 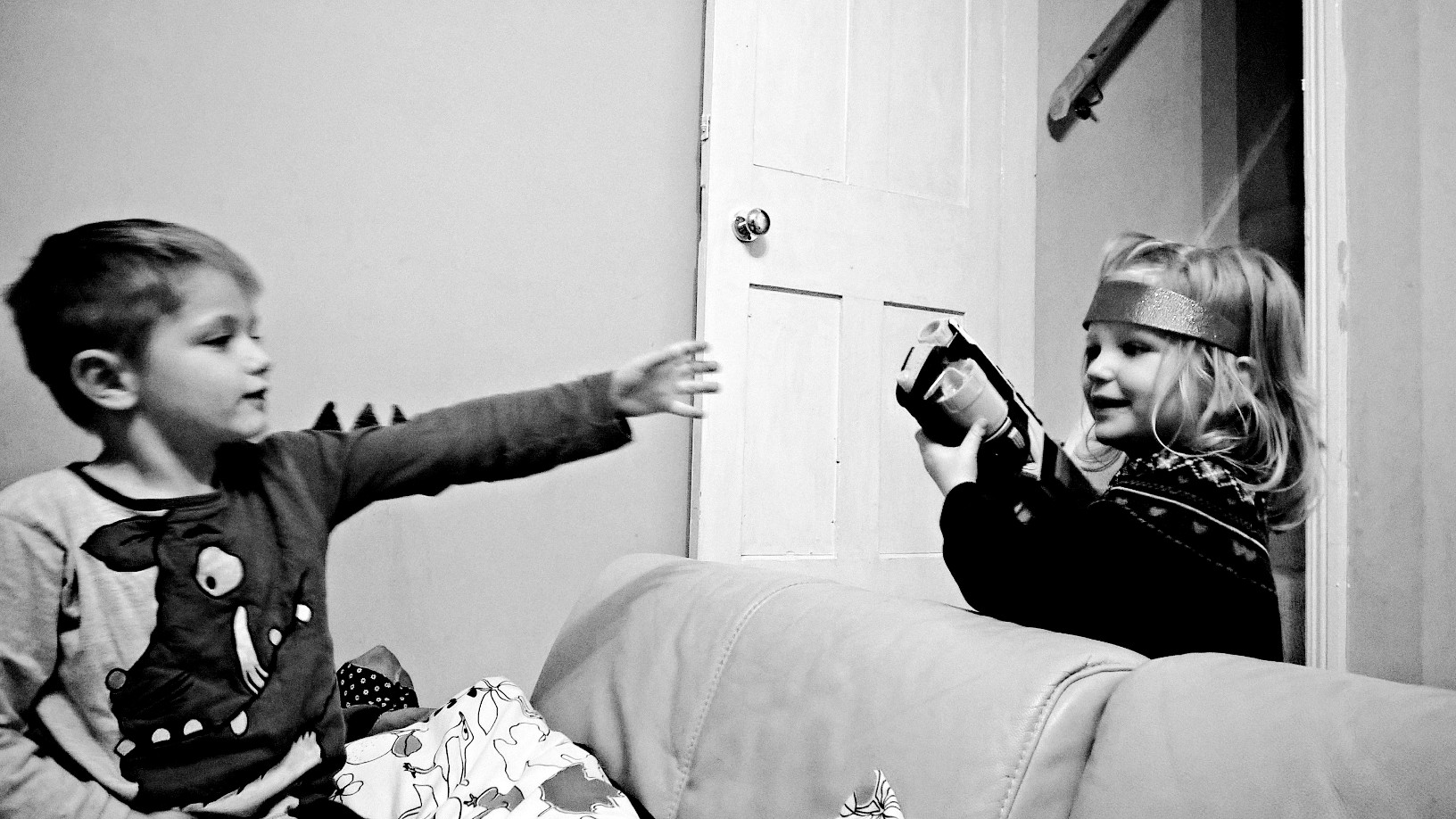 I have basically trawled through the internet the last few days on this journey of how I want Christmas to be and how I can reduce the amount of wanting and tantrum throwing from my kids. I have hoped that I would find a family that had established ideas similar to mine in a practical way that worked and that meant their kids got nice stuff, it was flexible, timeless, and it was also controlled and limited…and with all of that I came across a beautiful blog post entitled “Why my kids don’t write Christmas lists” and it spoke straight to my heart. This post addressed some of the things I wanted to focus our Christmases on, it spoke of the traditions I hoped we would have and their gift buying approach made a lot of sense to me and I just thought it was BRILLIANT! I loved that the focus was giving, the focus was Christ and the gifts were surprises based very much on what the parents thought they might enjoy, as oppose to a tonne of things the child thinks that they want that are likely to be clutter or broken a few months down the line. 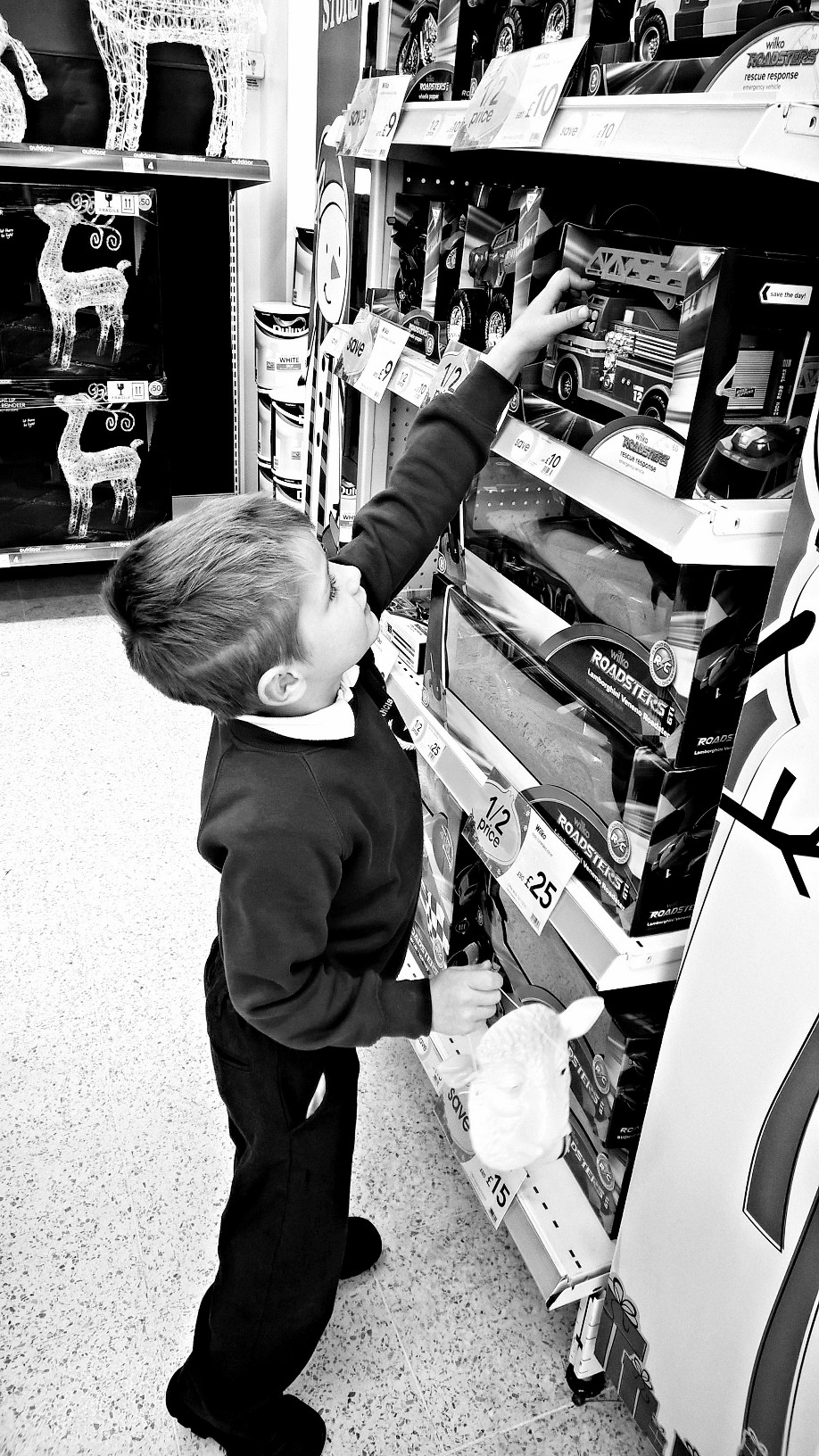 So on Monday evening Nath and I discussed it and he too loved the idea that we give them 3 things each as surprises (he probably thinks it’s going to be a money saver) and also to mirror that of the gift giving scene set by the Nativity. We will then also fill a stocking for the whole Santa tradition of this and that we think they’ll like, and then whilst we may discuss wish lists, we will not write lists of wants and ask for things, but choose things together that we think they will love and that are decent, that encourage them to share and play together and that will last them beyond the latest craze. Its not an issue of money or trying to skank our kids, I see gold as a valuable substance that was brought to the baby Jesus and would happily buy them a pricey item if we felt it was suitable that year, but more valuable than that is what I want them to get from Christmas and that is that I simply want them to connect Christmas with Christ, love, others, giving and the spirit of surprise. I want them to see outside of themselves!

Our battle plan over the next few weeks is when they ask for stuff, to reply with “Oh yes that will be lovely, lets wait and see or maybe you can get it for your birthday”, and hope that they will soon begin to see what Christmas is really about!

I just absolutely love this idea, and I love it for myself too, because it’s so easy to fall into the trap of wanting so many things. I love my birthday because it IS about me and it is MY day, just as theirs is for them. I see it as a time to be treated, a time to even be spoilt with lots of lovely things, and a very appropriate time to make requests and wants…but that’s not Christmas, at least not to us. To us it is about giving, because God gave His Son. It is about thinking of others because that is what his life was about. It is about gratitude and it is about kindness, not selfishness and wanting. And I hope that we will remember this in our family and that our kids will learn that there is more to this time of year than “I want”… We have always done lovely things anonymously for people throughout December and now that the stress I was feeling over my own families attitude to it has been lifted, we really hope to step that up this year, as we feel both Ethan and Megan can offer so much more and begin to get a sense of how much Joy comes from giving to others! 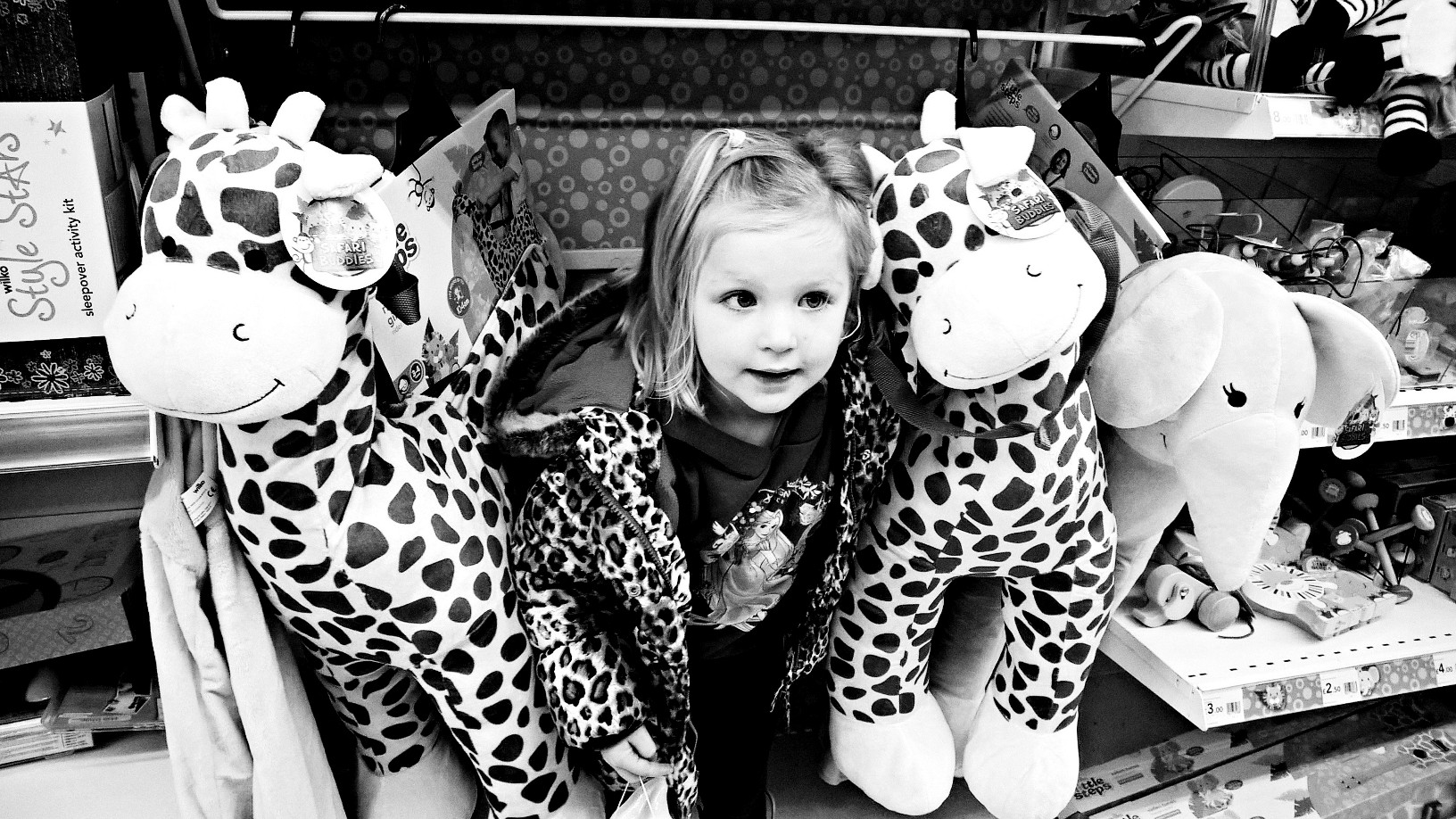 I hope however you choose to celebrate Christmas time, or whatever you choose to give to your kids as gifts, it is because it feels right in your heart and not because you are going with the flow set by so many others.