Last night I took my mum to Hull New theatre for a pre-mother’s day treat to see the new British musical comedy “Made in Dagenham“. Performed by locals – Hessle theatre company, It is an inspiring true story of equality, friendship and standing up for what’s right. I loved the overpowering message of the strength of women – in and out of the home. I was both touched, and empowered, by the message that when women unite amazing things happen!

It was no surprise to us that with such an empowering message for all women, that it was a heavily female audience all laughing, crying, clapping and toe tapping along together – and very much filling Hull New Theatre with girl power! It was a truly wonderful example of how women standing together transcends social barriers and together they can make incredible things happen. The cast were magnificent in sharing this message in a funny and emotional way and it was a brilliant performance.

Nothing in this world changes unless it is challenged and Made in Dagenham is all about challenging the men’s world and what has become the social norm. It is a key piece of British History depicting the 1968 Ford sewing machinists’ strike for equal pay. It radiates strong women realising their strength and how together this can make a difference for themselves, their families and the women of the future.

Set in Dagenham, Essex in 1968 it follows the story of Rita O’grady and her work colleagues/friends at Ford’s River plant Factory in Dagenham. Here the men work on the production line and the women sew car seats in terrible conditions. When they realise they are not respected or appreciated for this pivotal role in car production, and that they are not being paid the grade for skilled workers (or even classes as skilled workers) they take it to their union reps and management in a hope that things will change.

In an attempt to pacify them and keep them suppressed and “in their place”, the “men in charge” raise it as a grievance with a plan to shelf for a few months. This unsatisfactory response angers them further and it quickly escalates into a battle for equal pay and respect – something American women have had since 1963! Along with the women at Ford Liverpool, they all walk out on strike, leaving Ford “up the creek without a paddle”. It quickly becomes a political issue and women from all walks of life come out in support for women’s rights.

I found it pretty funny in all of this, that the male consensus was “the women have gone mad”, as opposed to looking that changes really needed to be made and that women needed to be seen for the power and contribution they have both in their homes/families as well as in the workplace. It saddened me to see how hard women work and how little respect and power they had. 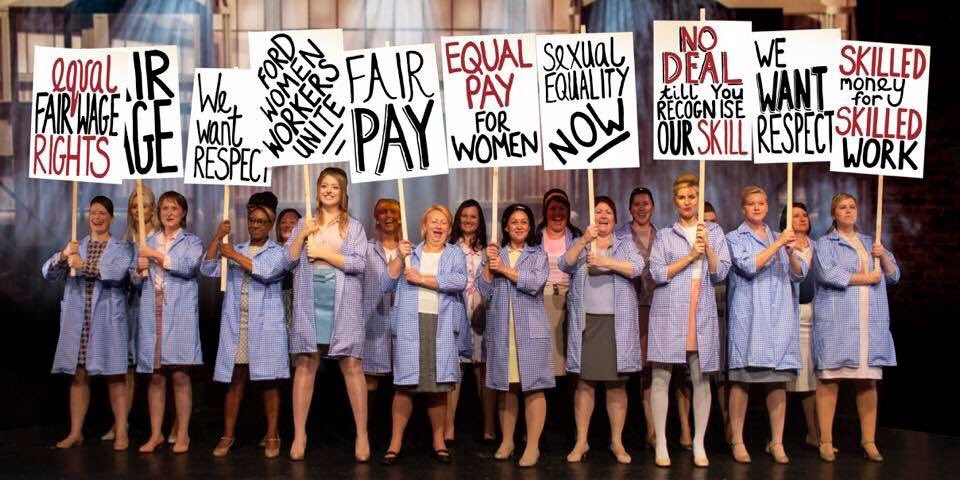 I have obviously been living under a rock because I have never seen the film and wasn’t particularly familiar with the story either until I read into it prior to seeing the performance (and then had my mum fill me in from her perspective). I did however really enjoy it, especially the second half – it had a lot more energy and had some of my favourite scenes; including the grand arrival of America Ford Rep “Mr Tooley” (complete with cheerleaders and catchy song “This is America”). He was hilarious and played the American arrogance well – I especially loved his run down of american words mispronounced from the English language. Having lived over there for 18 months it really made me laugh!

In Act 2 there was also a very moving solo by Joe Porte who plays  Eddie O’grady (Rita’s Husband). It was brilliant, emotional and even had an ounce of comedy to it too.

Aside from a good dose of colourful language (I am a little old fashioned in that sense but get that it was a representation of the 1960’s “working class”) and a parking ticket afterwards (whoops!), the night was really lovely and the all singing, dancing cast were fabulous. The songs were catchy, the set and lighting colorful and I found it to be a great idea and night out for a mother-daughter, sister or just general girly friendship trip out on the lead up to mothers day.

You leave feeling joyful and truly grateful to be a female – thankful for the women who have gone before and empowered to be a strong women in the here and now!

Made in Dagenham is on now for only 1 week at Hull New Theatre and is described as ‘The best British musical since Billy Elliot!’ – So grab a ticket and rediscover how ordinary people can do extraordinary things when they stand together.  Made in Dagenham tickets

*Thanks to Hessle Theatre Company for a wonderful girls night, and for a complimentary show in return for my thoughts.