Christmas in November for many is a little too soon,but for us on Tuesday evening it was totally called for. We enjoyed a very sparkly and incredibly joyful evening with our older 2 kids (as well as a boost of Christmas cheer) at Hull New Theatre, where we caught their latest show –  Elf The Musical.

Elf is our favourite Christmas movie and one we watch several times over each year – we love it and laugh out loud at the same spots annually. We were excited to see it brought to life on stage, with a familiar story line and characters, but with the added bonus of music choruses, aerial stunts and a magical flying sleigh, because of course – “The best way to spread Christmas cheer is singing loud for all to hear”! 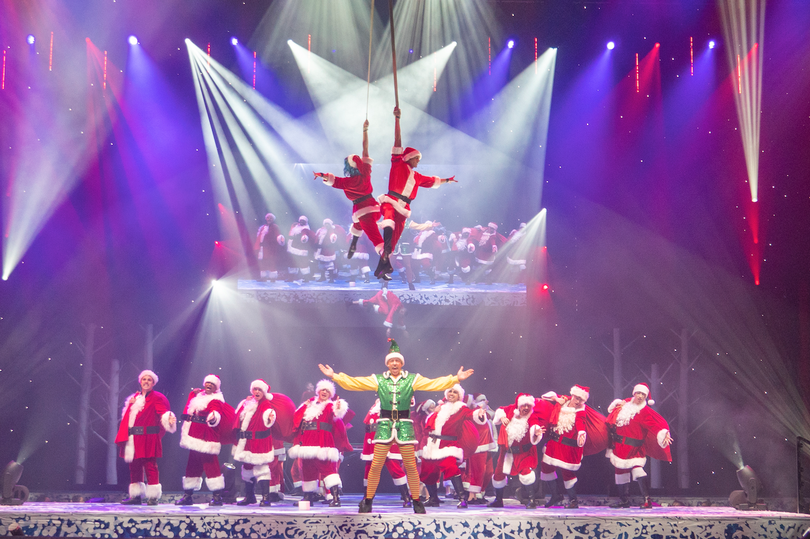 Based on the hit movie starring Will Farrell, this spectacular show sees Christmas come early, and brought to life a much loved Christmas film with a brilliant cast of energetic, funny and memorable characters. The elves had us laughing out loud too as they shuffled around the stage and the kids absolutely loved the antics of Buddy as he set out to find his dad in New York City – who of course is on the naughty list! Tam Ryan who plays the main character Buddy was fantastic – where he gets his energy from who knows, but he maintained the antics and fun throughout and was nothing short of brilliant. He really did the part justice and the kids loved watching him and the funny things he got himself into.

If you are not familiar with the story of Elf, it is the most hilarious festive tale which follows the fortunes of Buddy; a young orphan child who mistakenly crawls into Santa’s bag of gifts and is transported back to the North Pole one Christmas eve. Unaware that he is actually human, Buddy’s enormous size and poor toy-making abilities cause him to face the truth that he isn’t like the other Elves! And so, after hearing the revelation that he is human and with Santa’s permission, Buddy embarks on a journey to New York City to find his birth father, discover his true identity, and help New York remember the true meaning of Christmas. Buddy’s adventures and story are brought to life with an all singing and dancing cast which features an amazing flying sleigh, twenty feet high growing candy canes, a giant LED screen with Pixar style animated backgrounds, and aerial stunts. It is so funny (did I say that already?) magical and the ideal early treat to get into the Christmas spirit this year.

It is a feel-good family show that is guaranteed to bring you joy for the evening and laughter a plenty for days to come. So why not let the festivities begin now (yes, in November) and catch Elf The Musical at Hull New Theatre this weekend… with a sleigh full of magic and merriment, plenty of sparkle and hilarious banter, it is better than a panto and makes for a wonderful night out together!

**My kids were 9 & 11 and I think the ideal age – they found it funny and thoroughly enjoyed it. There were younger kids in the audience, but I think some of the humour and jokes weren’t always the most appropriate (though it likely went over their heads).

You can buy tickets from the box office here – BOOK TICKETS FOR ELF and they start at £20.

*Thanks once again to Hull New Theatre for inviting us to review another wonderful show.