Last night, in an almost full house, my sister and I had the pleasure of being in the audience at Hull New Theatre to see Blood Brothers on its UK tour. With such a real life depiction of class division, childish (and adult) humour and a gripping and intense second act, it is very clear now why almost every seat was full and why almost the entire theatre were up on their feet applauding it’s poignant end. 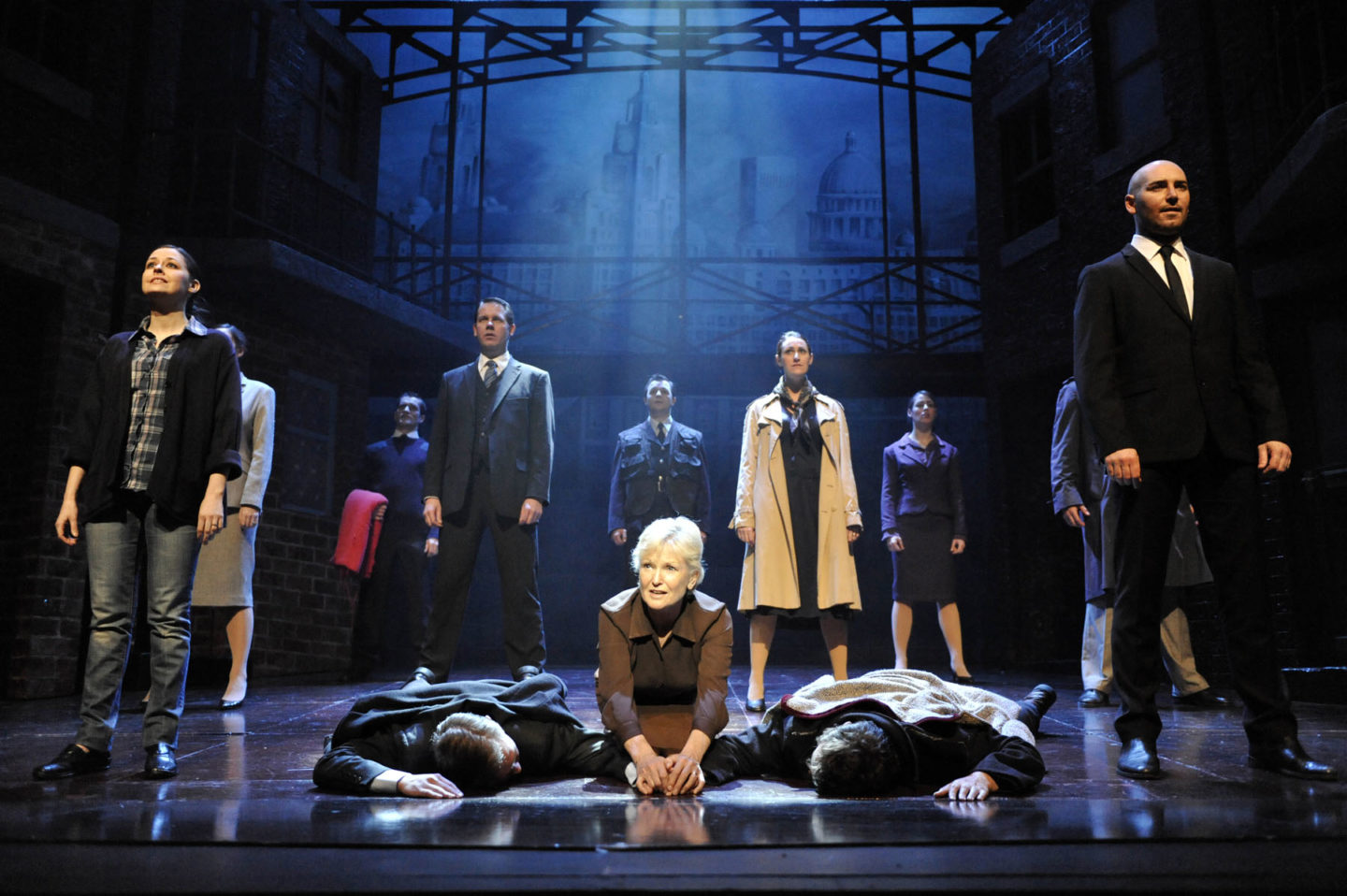 Written by Willy Russell, the legendary Blood Brothers tells the captivating and moving tale of twins Mickey and Edward – two brothers separated at birth but brought together again through an unlikely friendship.

Mrs Johnstone (played tremendously by Lyn Paul) is already living very much below the breadline in the slums of Liverpool. After learning of yet another pregnancy, her husband leaves her and the children for another (younger) woman, forcing her to not only be a homemaker, disciplinarian and nurturer, but now also provider for her poverty-stricken family. Mrs Johnstone’s despair is lifted briefly when she is able to find herself a cleaning job for an upper (middle) class family in a nice area of the city, and begins to have just enough to meet the demands of life with an ever growing family.

But then things become worse again as she learns she is expecting twins! And the thought of feeding 2 more mouths, along with the threat of welfare being involved and some of her kids potentially being taken into care, creates an air of desperation for her. Sharing her fears and worries with her employer – Mrs Lyons – causes her to take advantage of this vulnerable expectant mother and she offers to take one and raise it as her own. Mrs Lyons has faced heartache of her own through infertility and seeing this opportunity to finally have a child, uses all of her charm and promise of a comfortable life for the child, to persuade (and manipulate) Mrs Johnstone to give her one of the babies.

A pact is made between these woman from opposites ends of the social spectrum, and with their familial relationship concealed by their parents, the boys are raised separately – and none the wiser.

Despite years of striving to keep them apart (mainly because of superstitious beliefs), at almost 8 years old the pair find themselves irreversibly intertwined. This takes it’s toll on both mothers (more so Mrs Lyons) and they decide to relocate to the country, severing this unwanted friendship. I love that kids do not see class or status, but are so much more accepting – this was a thought racing round my mind as I watched this friendship unfold and then them deal with the separation. However it didn’t last long, when years later their lives continue to be tangled again due to a relocation of social housing in the country.

Mickey and Edward try to conquer the social divisions, but their friendship is damaged and they are forced to deal with the harsh realities of class consciousness, when Edward leaves to attend Oxford, whilst Mickey spirals into a life of crime and depression. 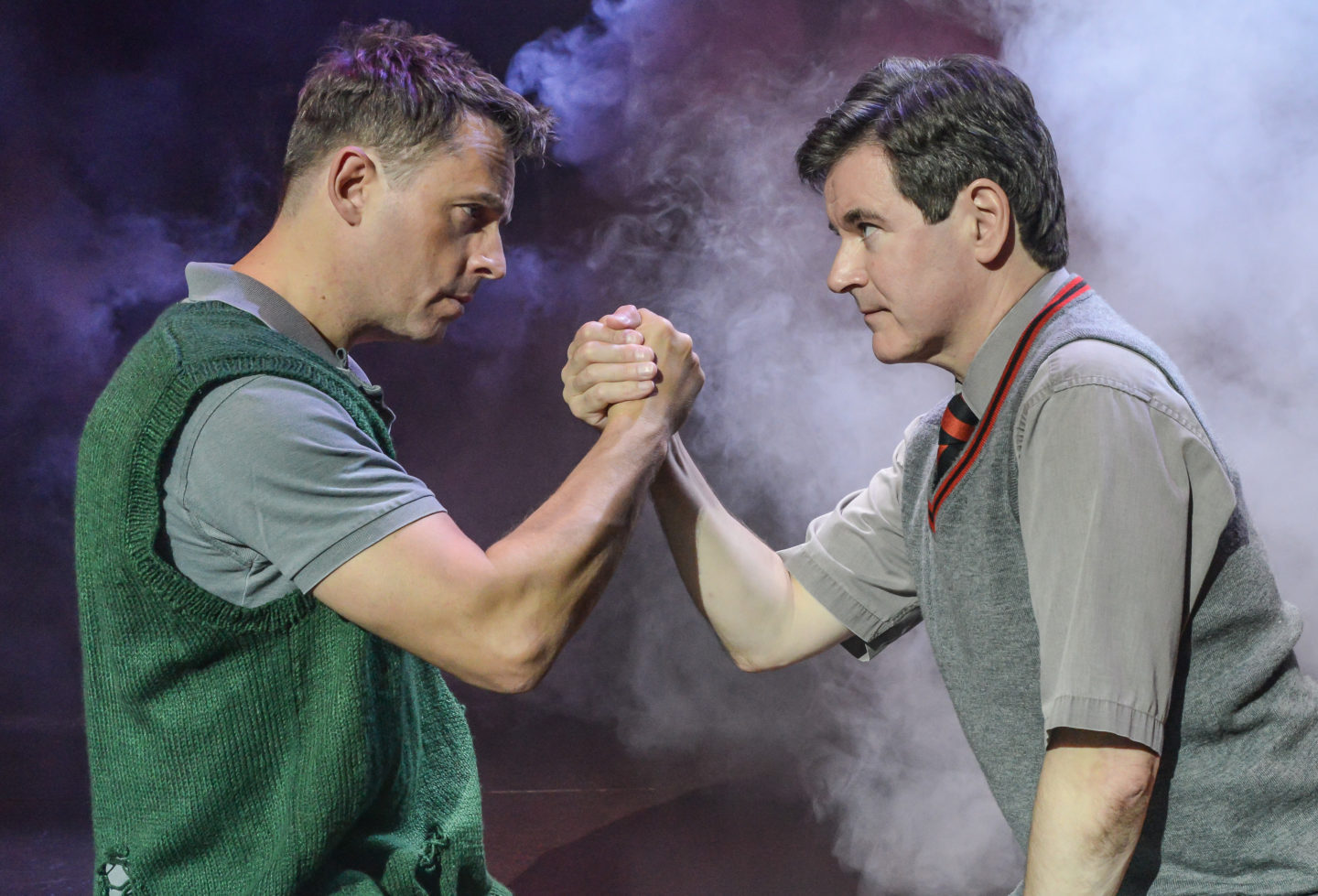 Everything about Blood Brothers fascinated me so much; from its incredible and stunning set to the powerful music played by the orchestra. Both of which were extremely atmospheric and took us on this wonderful journey of life in a very real, humours and emotive way. It was so impressive.

But, what I loved the most about it was that it unapologetically covers so many gritty and important issues in a raw and powerful way – infertility, poverty, class division, crime and justice, mental health and relationships and infidelity.

The cast were outstanding and portrayed the innocence and frolics of childhood in such a carefree, naive and comical way in Act 1. Which was so impressive when in contrast, they were able to show the dark, distressing and painful struggles of adulthood come Act 2. When childish things are put away and adolescence into adulthood creeps in, the class division suddenly becomes more evident and life for Mickey intensifies. Alexander Patmore (who plays Mickey), was magnificent and gave such a powerful and emotive portrayal of mental health struggle. His transition in each stage of life was very well played and his part in the finale was powerful beyond words.

This is a must see for so many reasons and I can totally see why so many people love it! It certainly opened my mind to the real effects and damage of class division, poverty and superstitious beliefs. It was beautiful, funny, heartbreaking and simply brilliant!

Blood Brothers runs from the 22nd to the 26th of October, 2019 at Hull New Theatre (other dates available around the UK). Tickets are on sale starting at £15 can be booked at the Hull City Hall Box Office –  call 01482 300 306 or visit www.hulltheatres.co.uk to book online.

Please note this is and adult show – it contains some bad language, sexual references, crime, death and topics that are hard hitting!

**I received complimentary tickets for the purpose of this review!