A couple of days ago we returned to the LGI for a meeting about Poppy, you see when you loose a child, be it shortly after birth or due to stillbirth you are called back to the hospital any time after 12 weeks for results of any tests that were carried out as to why it happened and to also ask any questions about the whole thing. You meet with a specialist and they review the whole thing and I guess help you gain some closure on it all in a help to heal. I really wasn’t looking forward to it; fetal medicine Drs aren’t high on my list of people I want to spend the morning with, and plus it meant reliving the experience on their time scale not mine.

It started off just as thoughtful as ever with patient consideration at the top of their list. Our appointment was in “Fetal Medicine” (because every parent that’s lost a baby wants to go right back to where it all began) only accessed by walking through the antenatal clinic (which we all know I love nothing more than seeing pregnant women).  Nath and I both discussed the obvious question “out of all the rooms in the hospital there isn’t one other free space AWAY from pregnant people and the diagnosis department that we could hold this already painful meeting?”. Its another reminder that unless you have lost a child/baby that you wouldn’t think of those small things that can ease the heartache for the parents. 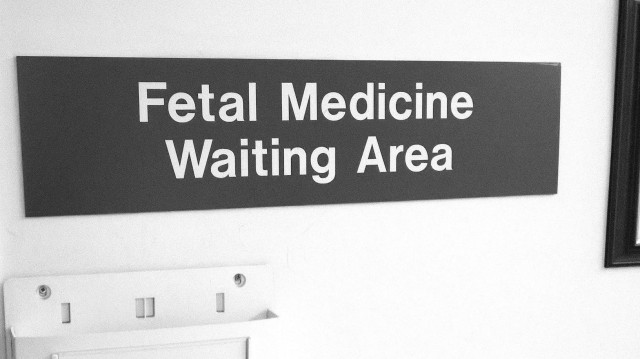 I was grateful that the consultant we had was one that we haven’t previously worked with and so had in our minds a neutral player. She was very considerate and genuine in where we were at with our grief and coping. I just wanted to get to the point though and find out what the deal was. I wasn’t there for small talk with people that had written my baby off!

Before I continue sharing with you what came to light I must stress one thing – whilst I was pregnant I was constantly concerned that my placenta would fail and that Poppy would be stillborn, these things are common with Trisomy 18, yet despite our wishes to see our baby alive the “Specialists” said that wouldn’t be an issue. After 3 requests after birth they finally sent my placenta to be tested, I am glad I asked…

The Questions we had for them:

We were grateful that more than once we received an apology and that for me especially I could get those questions aired and my points of research in Trisomy 18 put across to them and the potential she could have had! We were disappointed to find out that they never intended to care for her after birth in the way we had hoped, but we thanked them for referring us to the hospice, without which we wouldn’t have had our baby for so long with us.

As I left I came face to face with a mother giving birth in the foyer…no joke…for real! It wasn’t gross, I just heard a scream and of course looked up to see what was happening, only to see 2 staff pull out a baby from a mother stood in the doorway, I felt so bad for her but It was a beautiful reminder that babies are born all the time fit and well, it also was a painful reminder of what I didn’t get and that image as miraculous as it was ripped on my heart to the point that I couldn’t stop crying.
As we left the hospital and got into the car we realised that was the last official experience we would have with Poppy and her birth; no more appointments for her, no more questions to ask about her, no more discussions of her illness. Instead a year from when I found out I was pregnant with our 3rd child, Miss Poppy Quinn Smith, who held for us the dream of a bigger family and a new baby I am instead asking why I never held her alive, why instead of carrying a 4month old in my arms it resulted in carrying this heartbreak, grief and pain. Instead of a birth certificate we have a death certificate, instead of laying her in a crib I laid her to rest in a casket. And now we have no more appointments for her, no more official chats about her…its up to us to keep her memory alive, which is hard when people don’t always want to hear it , you never imagine that when you see that perfect face and wriggly baby on the scan that one day she won’t be there any more, that one day she will leave so silently you won’t even get to say goodbye

The reality of this experience is that often babies are born sleeping when it could have been avoided, communication between patient and Dr needs to improve and every child, despite their diagnosis needs a chance to live. They wouldn’t withdraw care from a child already living with a life ending condition yet they see fit to do that for a baby unborn with the same diagnosis. I often wonder how she/we would have been treated had we not had the chromosome testing at 30weeks but we would have just continued with a baby suffering from CHD.

%d bloggers like this:
We use cookies to ensure that we give you the best experience on our website. If you continue to use this site we will assume that you are happy with it.Ok
×