Here I am at 24 weeks pregnant and only 4 weeks away from my last trimester, so well and truly into the second.. you know the one where you are glowing, enjoying it and loving your blooming self? Yeah I am still waiting for all of that. Instead I feel mostly exhausted, pained and skin a little duller than one would hope. From some angles I look to have a neat bump, from others I just look fat.

It felt like it was dragging in the first instance, I guess that’s with so much worry I had and it was all I thought and could think about. But, now that I have been reassured and relaxed some, the weeks seem to be passing by at a fairly steady rate which is good, scary and exciting all rolled into one.
I have been pinning baby stuff and wandering round baby sections a lot more and even making the odd purchase, which I recognise as huge progress. Not just this but I have found joy in it too. At times I have to consciously remind myself to hope for a better outcome and do some of the normal pregnancy things to avoid regret, this sometime causes me to feel sad and other times is fun, its all so unpredictable still but if I feel it then I go with it, and if I don’t I am happy to avoid pregnancy things and situations where it might be the focus. 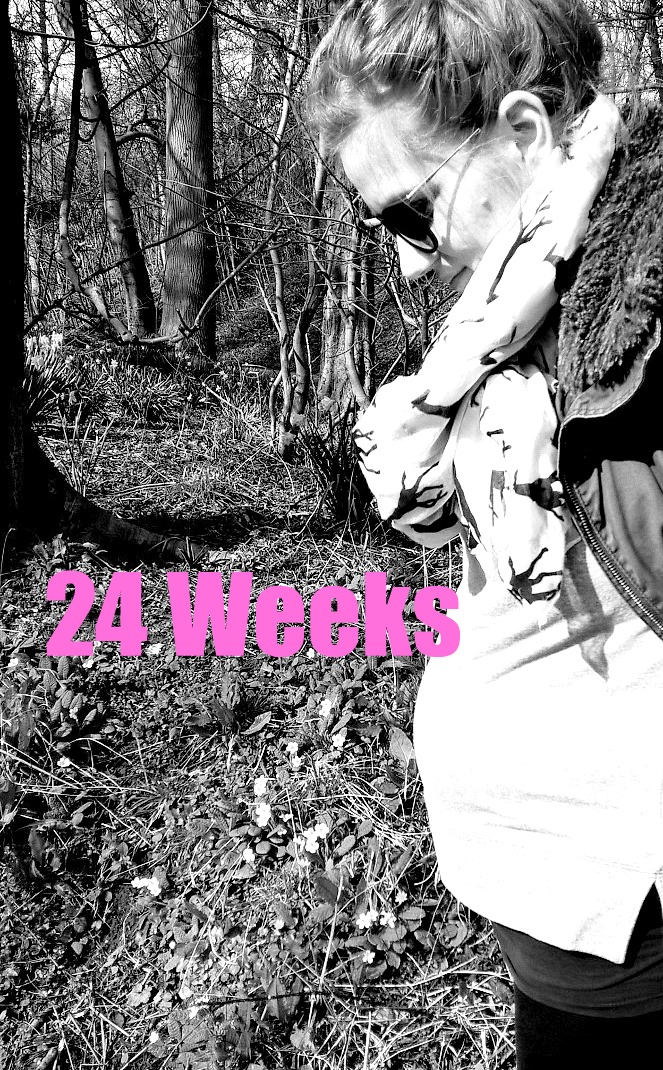 Feeling – The baby move A LOT, which is so reassuring and this week Mr Smith even felt a kick which was lovely. At first the movements made me feel sad, a little confused and then fear for if they suddenly stop again, but I feel for now I have moved forward from those emotions and enjoying the movements and kicks, and for the last couple of weeks I have actually felt rather excited about all of this.

Physically however is a different story…My hips are getting more and more pained with each week that passes and some days I can barely walk or get up from seated positions, which is both painful and frustrating. I only had similar things towards the end of my last 2 pregnancies so I think I will be mentioning that to the midwife at my next appointment. Other than that its just the usual tiredness, which is more so than past pregnancies, but I put that down to having 2 other kids to keep up with.

So yes… A lot of my anxieties I was feeling in the beginning and even up until a few weeks ago, for now have subsided and I am beginning to get into it… looking at baby stuff and buying the odd thing here and there is nice.

Food and cravings – Sadly nothing really at the moment which is very surprising, I did get a small craving for Root beer over a couple of days, but after a can or 2 from Asda, it went away, probably for the best with the sugar content!!!

My emotional eating of Ben & Jerry’s and Domino’s on a weekly basis with Poppy thankfully hasn’t reared its head and I am pleased to be eating better than I probably have out of all of my pregnancies, evident by my slow weight gain of just 10lbs, which is absolutely GREAT. But yeah, sadly right now there is no hankerings for unlimited tortilla chips like it was with Megs or Jacket potatoes and fresh fruit salads (not together) like with E…

Pregnancy woes – Bad hips of course and now for the last few nights vivid dreams are dominating my sleep. I had a crazy one about Mr Smith leaving which felt so real and had me waking up in a bad mood with him (awkward), but a norm for me in pregnancy! And then just a couple of nights ago one about labour and delivery which scared the pants off of me – EEEEKKKKKK! I cannot bear to think what else awaits to surface at night time, but I have a feeling this won’t go away for sometime as I am a dreamer at the best of times, and a crazy nightmare dreamer in pregnancy!

Other than that I realise I need to start making a list and decide on the things that are most important to me to purchase for baby. I am back at square one and in need of everything since dumping it after Poppy’s diagnosis, but then again that’s not a whole lot either as I know babies don’t really need too much.
I am also focusing a lot on my delivery and how I might like this to be. With my history and also fears around still birth there are so many options, but I think that’s content for another post!

SO for now I shall keep breaking out of my little zone and trying to buy baby things one step at a time, and enjoy as best I can the last 4 weeks of the 2nd Tri.