Today Alice is 4 months old…17 weeks and 4 days to be precise, and at such a significant stage in her development I can honestly say that I have no idea how much she weighs (busy mum life), only that 3 months to 4 has most definitely held the biggest changes in Alice’s little life thus far. She has gone from sleeping a nice chunk of 6hrs + to waking every few for feeds again as she embraces the 4 month growth spurt!

Her latest tricks include blowing raspberries, lip smacks and launching herself in an attempt to try and sit. She is most content when with her siblings or having cuddles from pretty much anyone, and she definitely requires a lot more engagement – shouting some babbles to make her self known! She chews her hands a lot being rather dribbly and soggy whilst whining, and she has kind of stopped feeling so much like a newborn now (sadness) and suddenly has a little character and a great ability to hold her own! She has this new little teething ring shaped like a hand which she gets a lot of enjoyment out of (biting and licking like a little cat), and loves that along with being able to stand tummy time for longer. 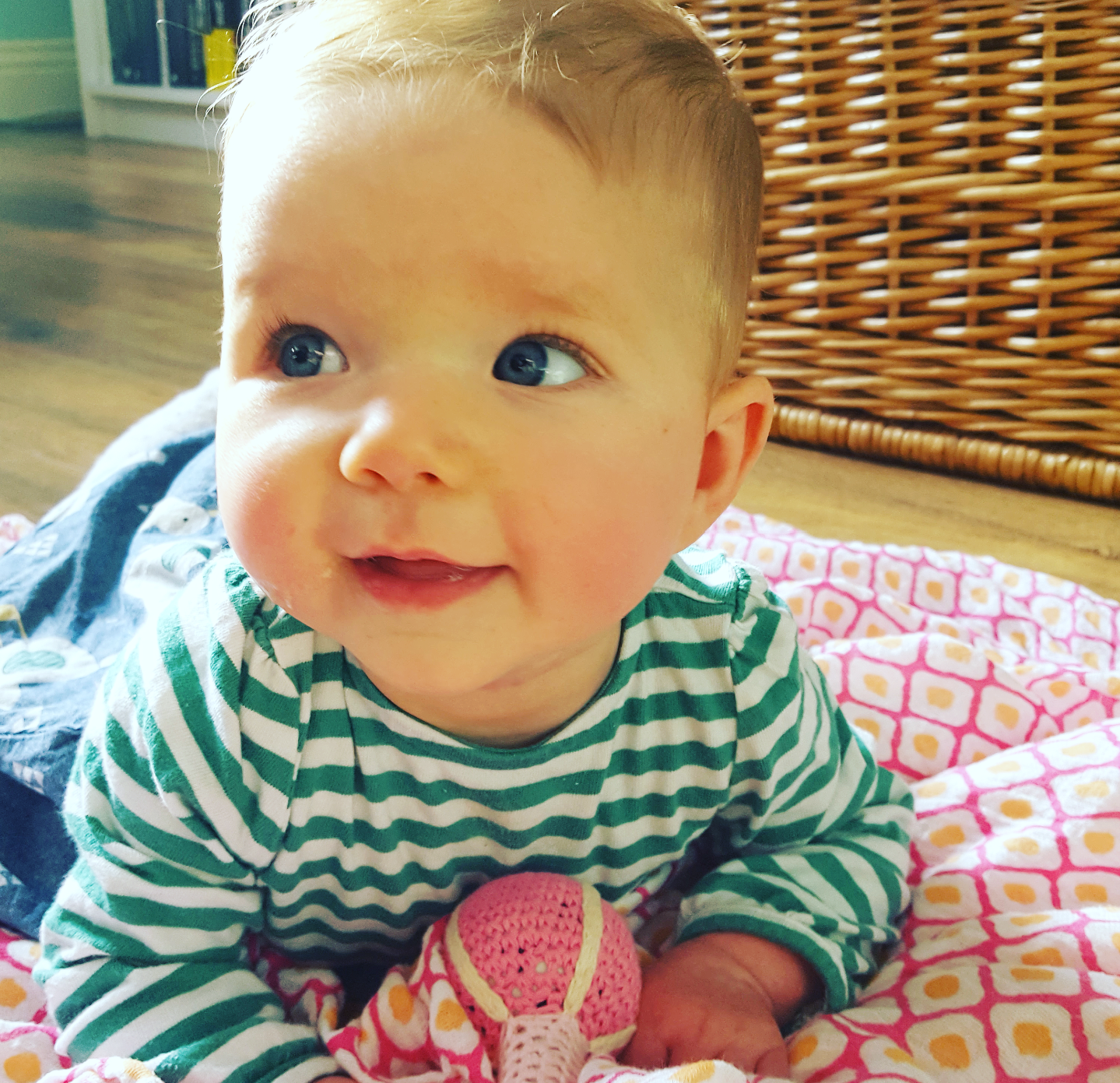 I have found in the last few weeks that people seem to ask how I am getting on, initially as its something to ask a new mother, but then their eyes go as if to say “but how are you really getting on”?! It is so very nice that they now consider that it might not all be plain sailing, but all I can say is that we are doing fine. Really good actually – Alice is an easy baby (thus far) and thankfully loves being cuddled, so if and when I am having a hard moment and do need a little extra squeeze, she is happy to oblige!

With that I will say though that with the lead up to Christmas it does feel a little strange. Christmas is a hard time generally when loved ones lost aren’t around, so it would be normal to feel sadness at not having Poppy here again, and maybe that’s what people are eluding to when they ask how I am getting on. I am trying hard to get everything bought before the 1st week of December so that I can focus on being jolly and spreading Christmas cheer to the kids, but buying Alice things is both emotionally challenging and yet lovely. Its so nice to have another child, another little face to enjoy the magic of the season, but of course its so hard that I am getting to do for her what I missed with her sister. Not to mention that the things I am buying would have been similar for Poppy on her 1st Christmas. I am hoping I will be able to feel less awkward about it all and lean more towards the lovely feelings of it, because Alice is great and I don’t want her 1st Christmas to be overshadowed by my grief at not having her sister here and missing out on doing those things…perhaps its part and parcel of having kids after a loss though and I guess its just something else to get over and get used to.

With 4 month growth spurts giving broken nights sleep combined with lots of dribbles and less nap time during the day, I am feeling pretty shattered and spend most nights in bed at 7pm watching Netflix. This stage is a great reminder to take it easy and remember that whilst seemingly coming on in leaps and bounds she still is very much our new little baby that requires A LOT of energy to look after and keep happy and fed! We adore her so much and despite the odd challenges that crop up with parenting after a loss, she melts my heart everyday I see that smile and those big blues eyes peeping at me! 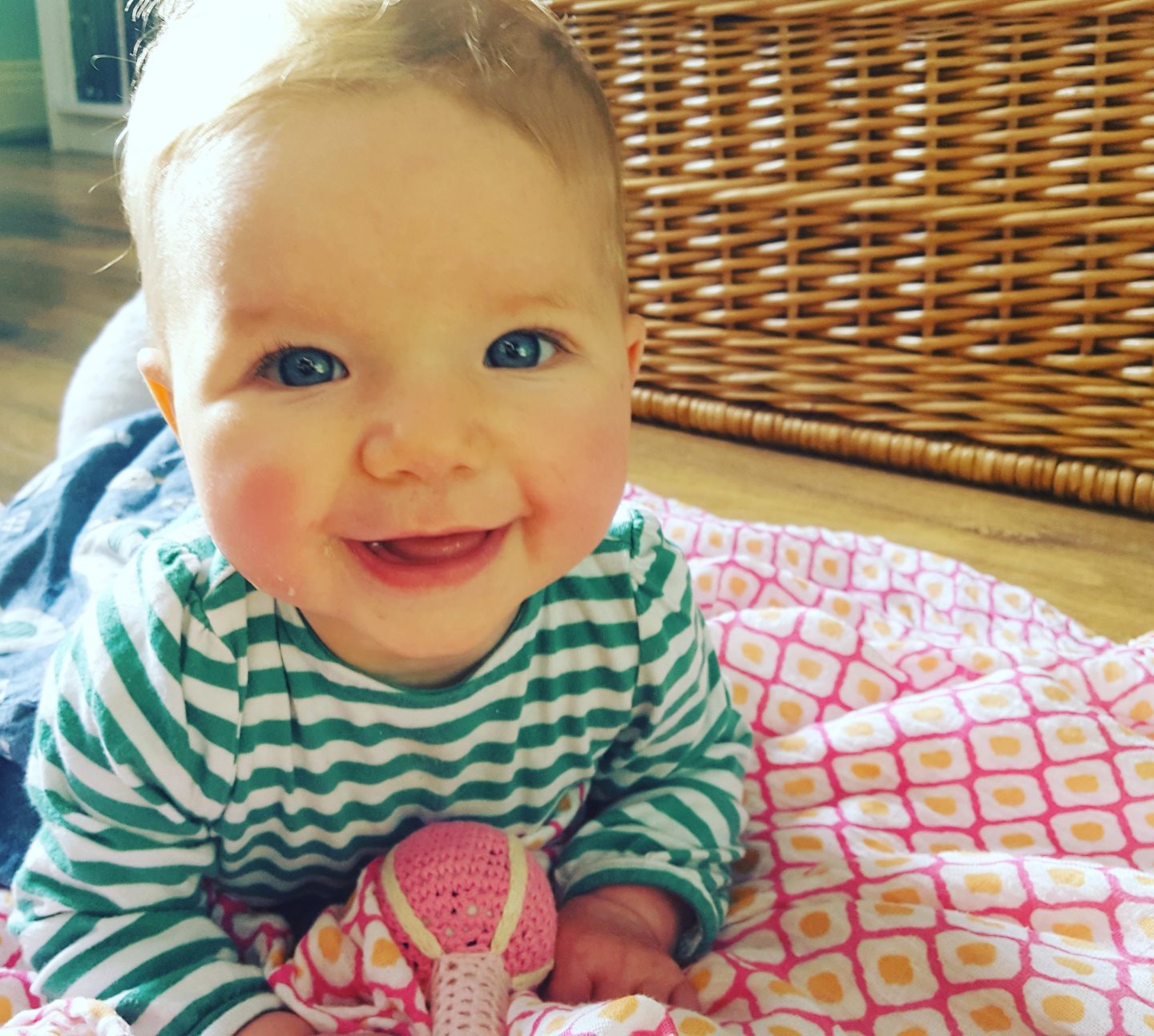