We made it to Kuwait – and are officially living the expat life! The last few weeks have been utterly exhausting and quite stressful too. But, while we have had to be apart for almost 4 weeks, and I ended up travelling to the Middle East with 4 kids solo, we are finally back together as a family and enjoying (in Alices words) “been in a country that’s been put inside an over, and we are being cooked!”.

Kuwait is hotter, louder and busier than Yorkshire, and we are enjoying finding our feet here. 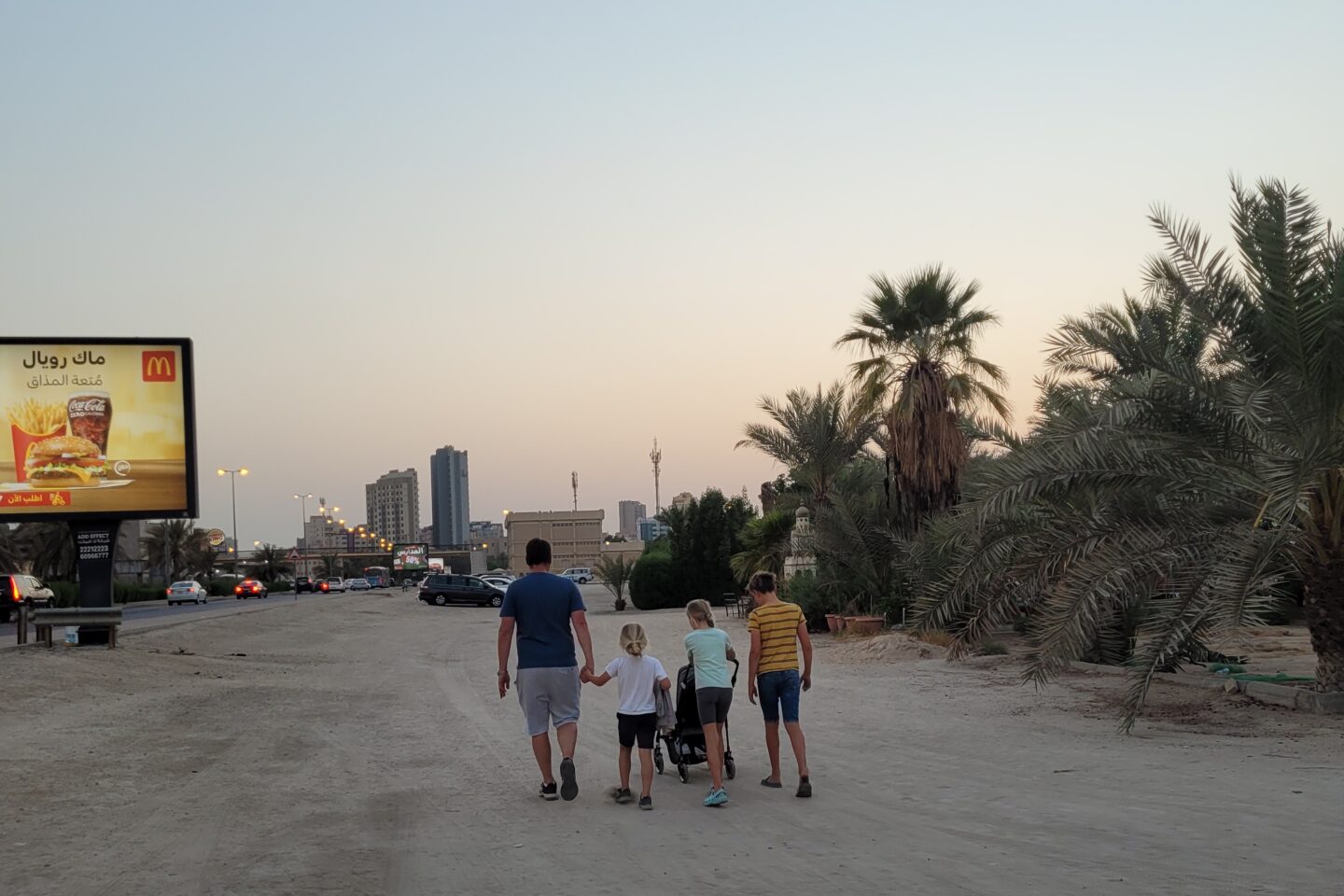 I think for anyone going long term to a country, Visas are often a bit of a hurdle – as well as the thing that holds things up. We followed everything we needed to get visas for Kuwait, but it wasn’t until Nathan went to the embassy in London to do them, that we discovered a vital piece of info that had been emitted, and that was that they recommend the man go first, get his civil ID and then sponsor the family to come. We still needed everything we had done (police checks, medicals and legalised documents), but we couldn’t really go together. BOO!

As Nathan was starting work, he had to go anyway, and so off her went mid August, and I stayed behind with the kids to join him later. During this time I moved our stuff into the new house and prepped what we needed. Nathan found out from other expats here, that many families come on tourist visas and the swap them when the civil ID comes through – we decided to do that so we could all be together again!

And so, last weekend I applied and got approved for 5 visit visas (90 days) and booked our flight to Kuwait. And then, after a week of packing, we were off. We are still waiting for Nath to get his civil ID and then we can apply for residents visas, and then once that comes through we will likely fly to Bahrain for a weekend before entering back on that visa for longer term. Some people also do that, and then renew a 90 day visit visa, but that’s also a bit risky!

You can fly from most UK airports to Kuwait (especially the bigger ones) and many change in Istanbul or Amsterdam. I was lucky to bag a cheapish flight from Heathrow (£265 each) and it was direct to Kuwait in 5hrs and 55mins! My brother in law was kind enough to drive us down in their mini bus, and then me and the kids headed over. The flight wasn’t unbearable, although at time it was a little rough with a tired and very independent 18 month little boy!

The other 3 kids were amazing and I was so proud of how well the 5 of us did as a little team to get here. The food was local on the plane (super tasty) and the crew so kind and lovely to us. 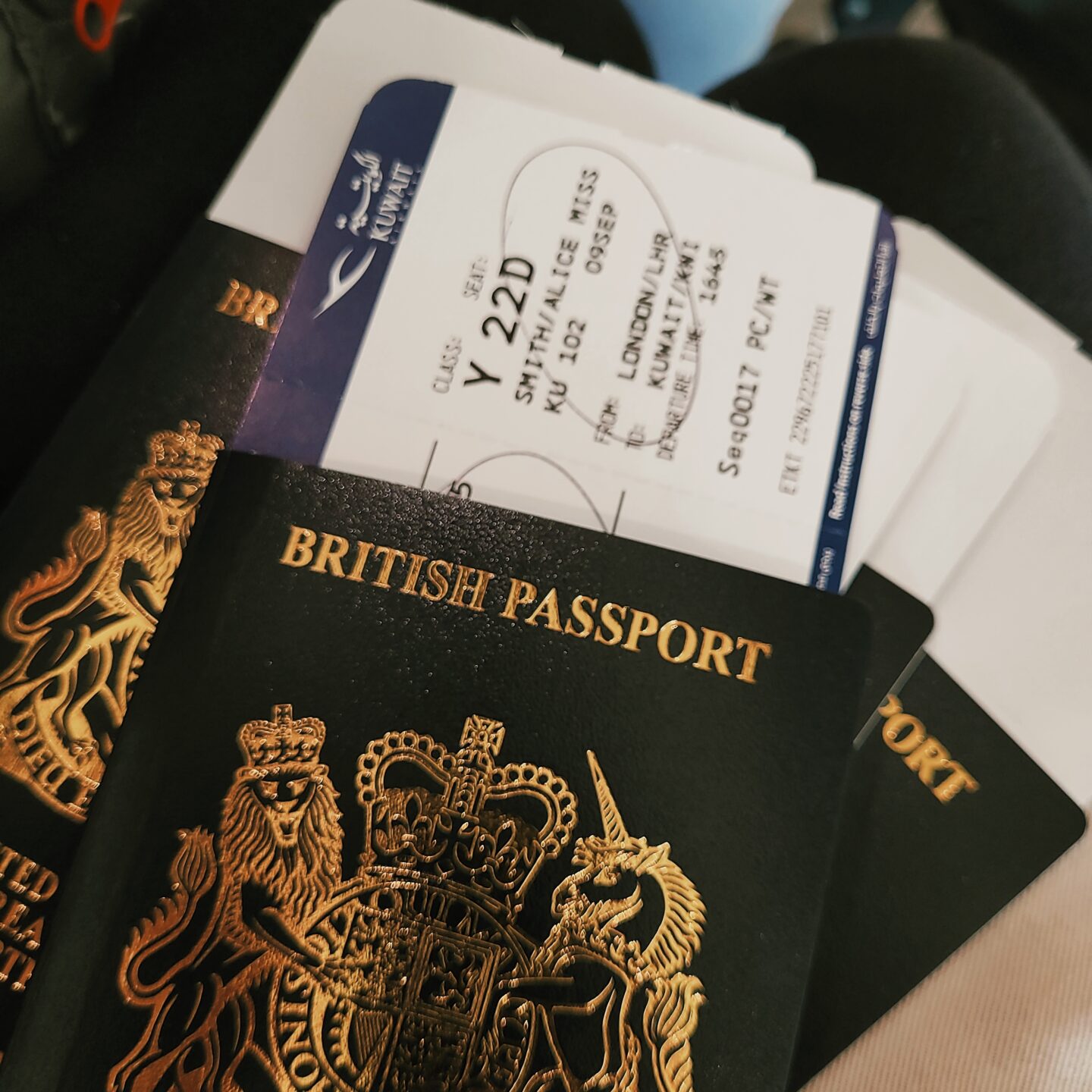 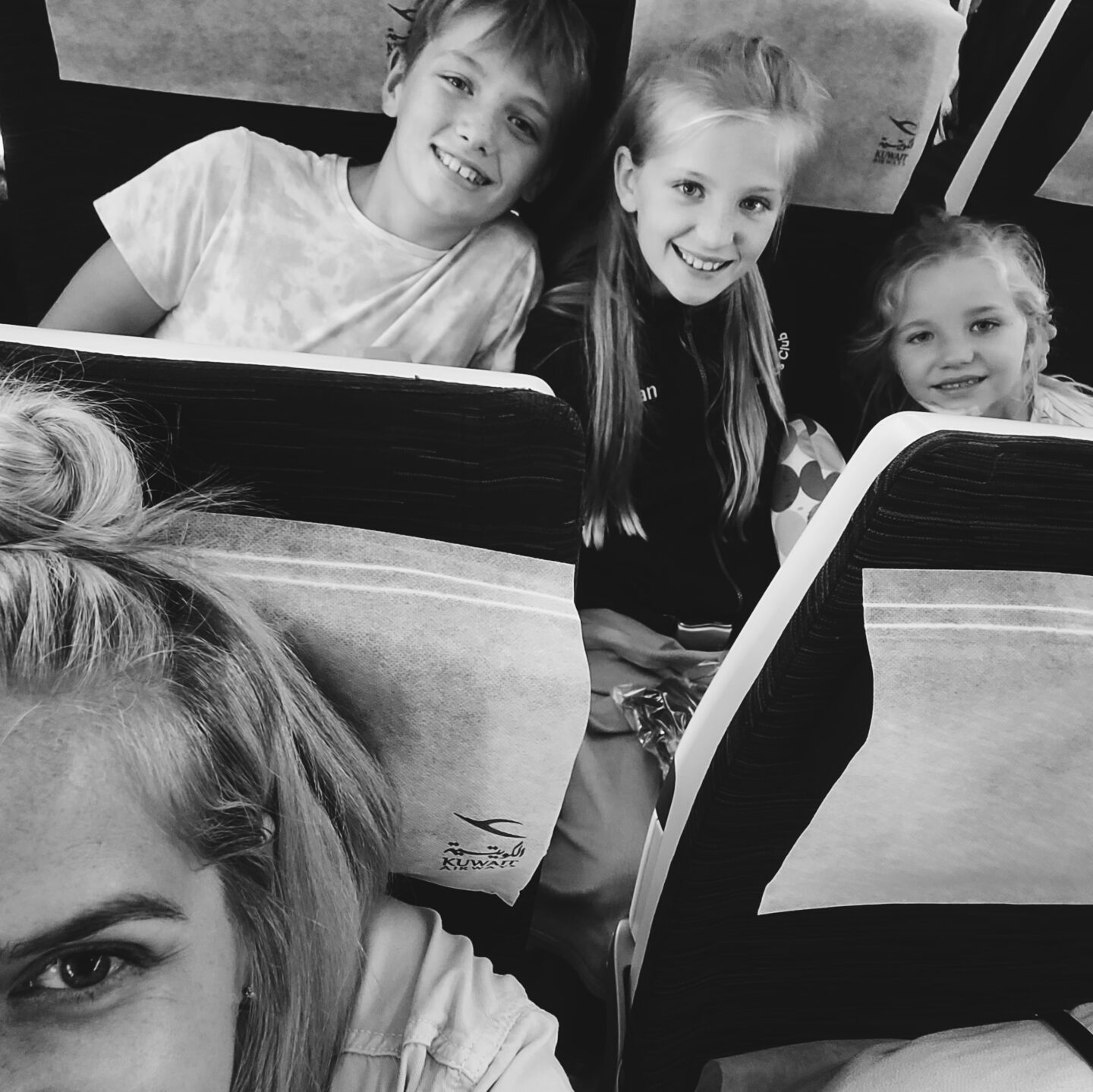 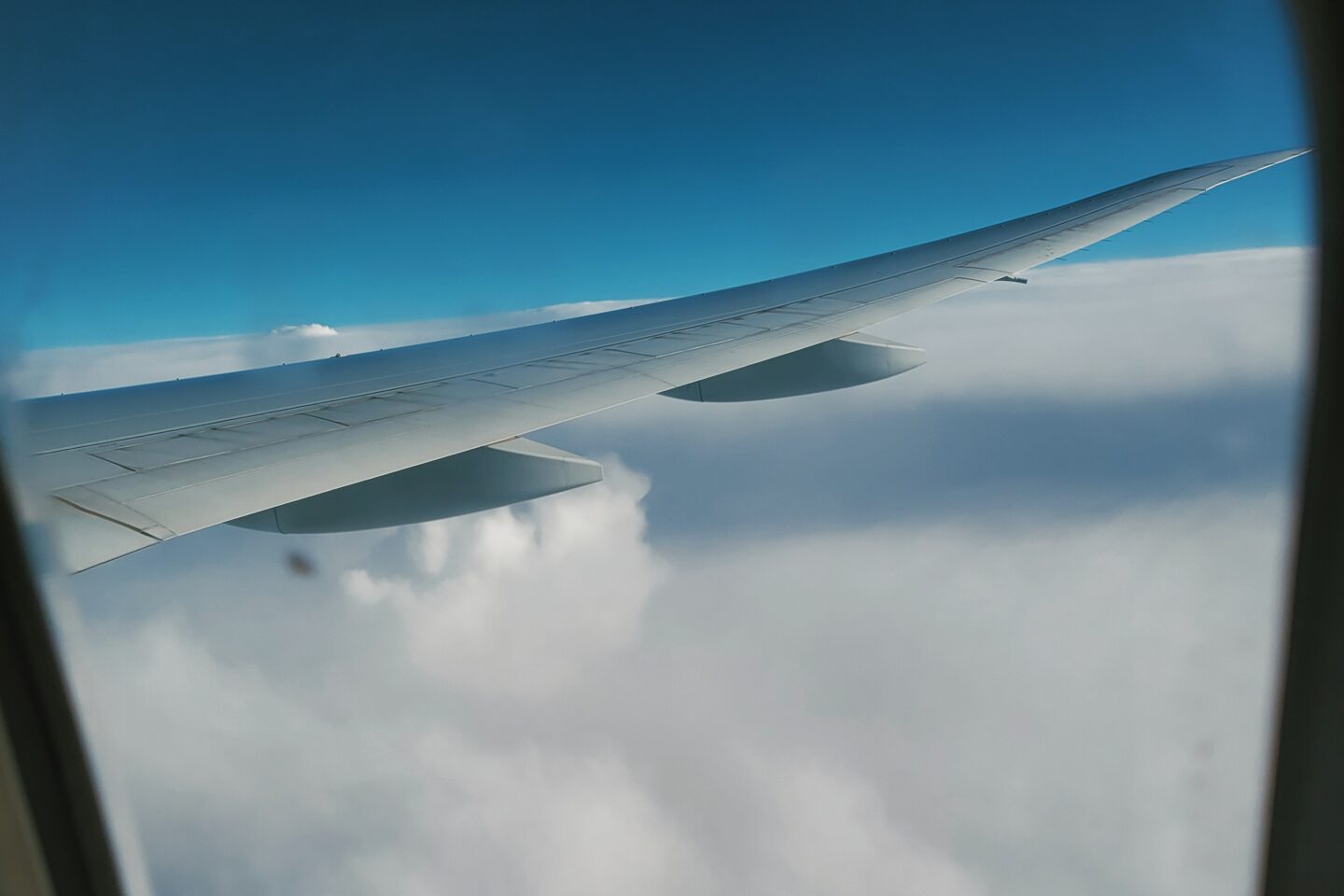 Once in Kuwait, we had to go to the Visa check in where the analysed everything and eventually stamped all our passports and allowed us in (phew!). Nath then met us at what was about 2.30am and his new friends drove us to an apartment. We spent one night there, and then the next day moved to the one we will be staying at for the first year here.

Our First few days in Kuwait

We’ve been in Kuwait just 3 days now and its HOT! Its been about 45c each day and so we’ve tried to stay indoors where we can, enjoying the invention of A/C and popping out here and there to get essentials and soak up the beauty of the place. On Saturday we visited “The Avenues” (the 22nd biggest mall in the world) which was so amazing and very clean too! It was fun to wander round and see the mix of UK, European, America and the Middle East – we were amazed by it all – and had lunch here too. We then went and got a bunch of stuff from Ikea to make the apartment feel homely.

Today the kids started school and loved it – and then after school they spent time in the pool… had dinner and finally saw the local beach when things had cooled off a little (only 5 mins walk from our apartment).

So far Kuwait life is much more relaxed than life in the UK. Its a sweat fest at the moment and we need to tackle a couple of little roaches (yup cockroaches! Gross!) that seem to think they can visit on an evening… but otherwise we are settling in nicely and are excited to explore and get to know this cool place. The apartment seems nice and while we are still trying to figure out the exchange rate and cost of things (usually more than the UK, but sometimes cheaper), and are yet to finish unpack properly, we are all happy and we love being back together and exploring a new place as a family. 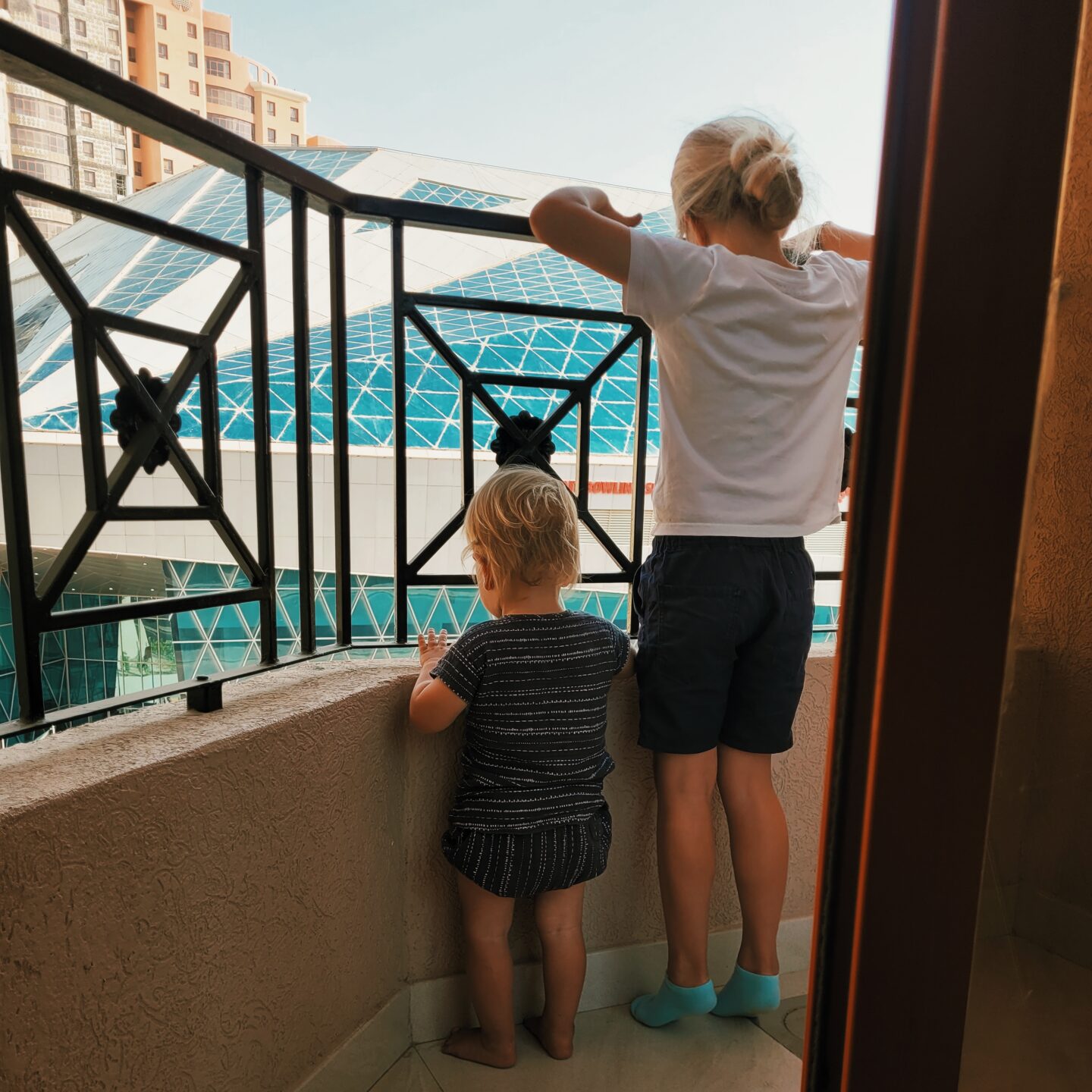 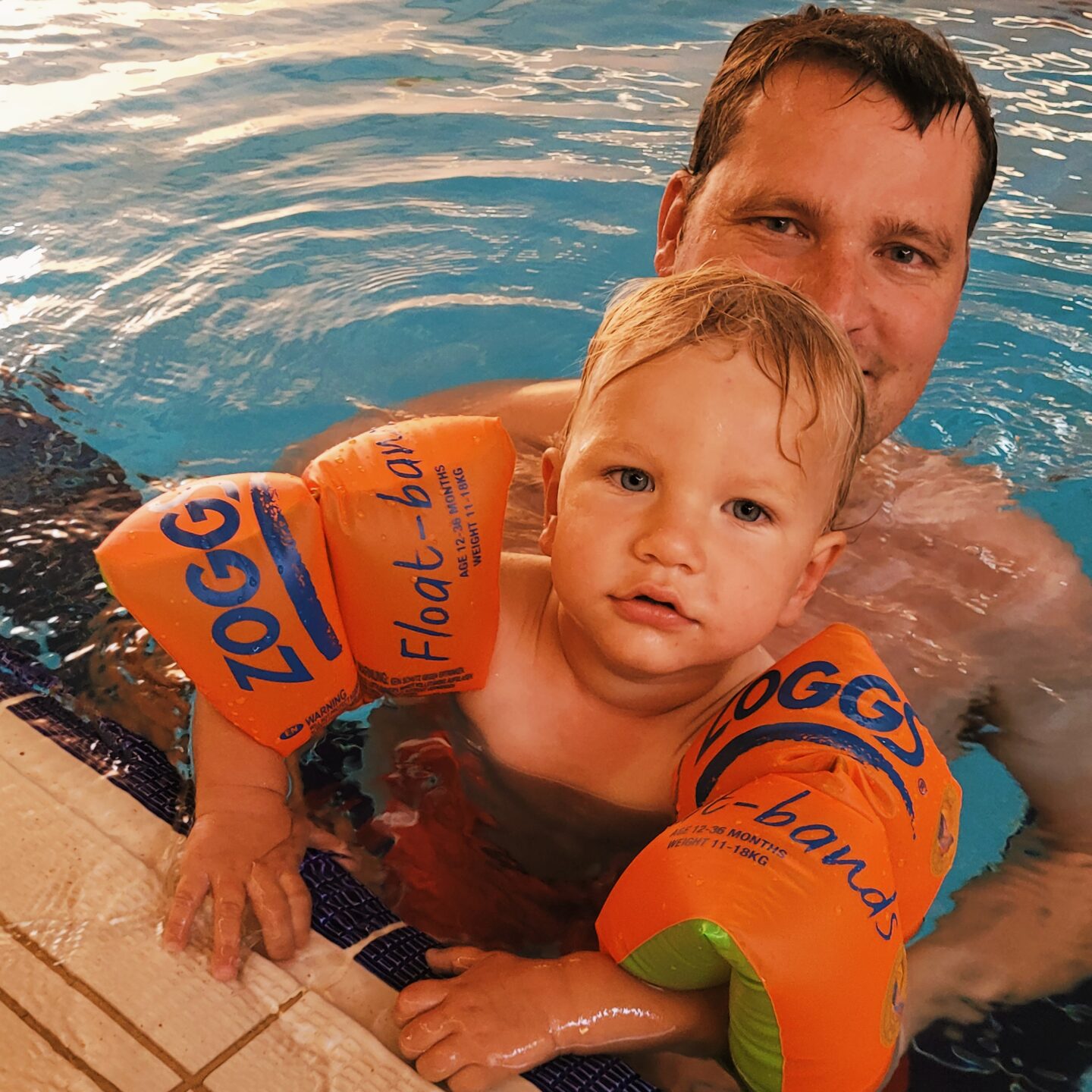 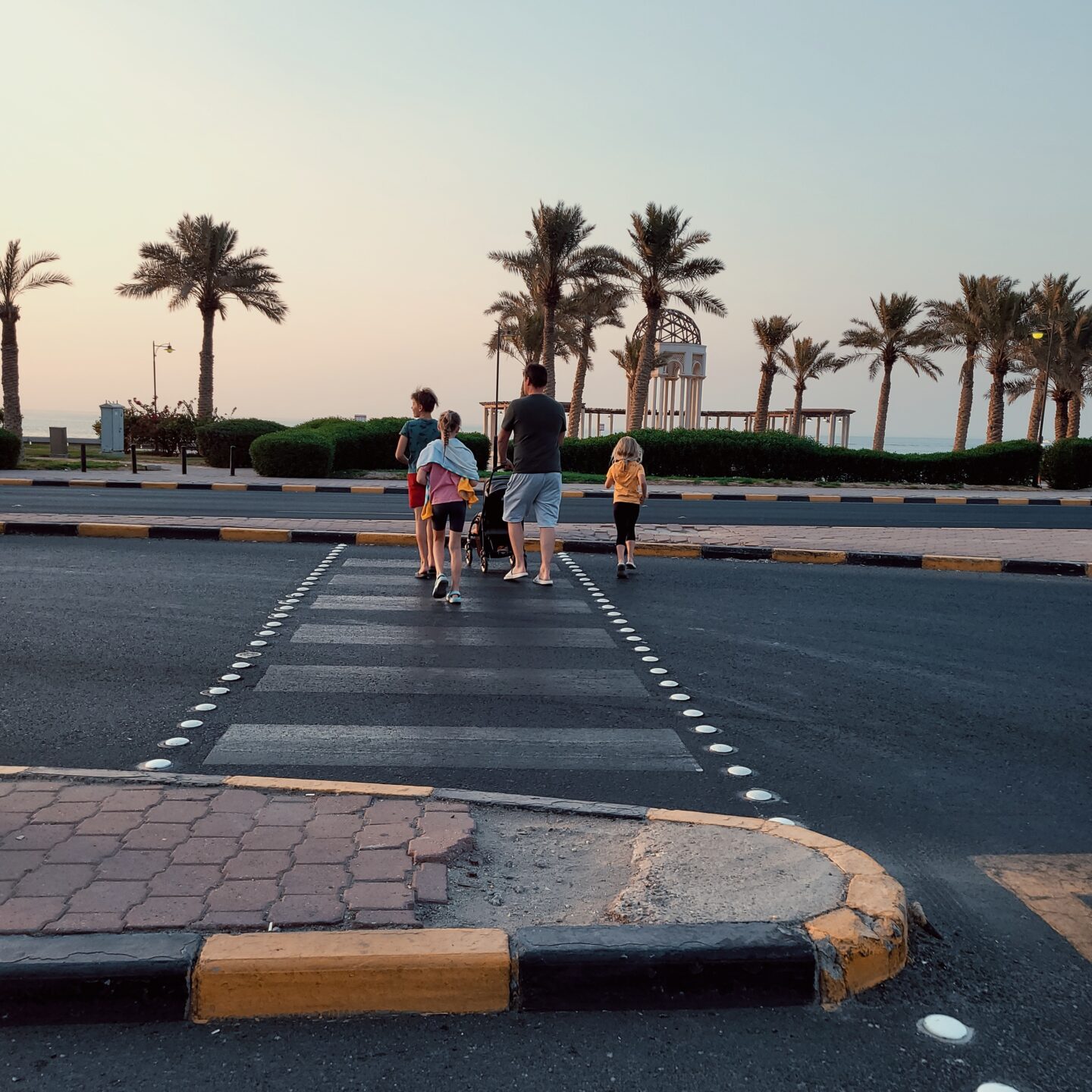 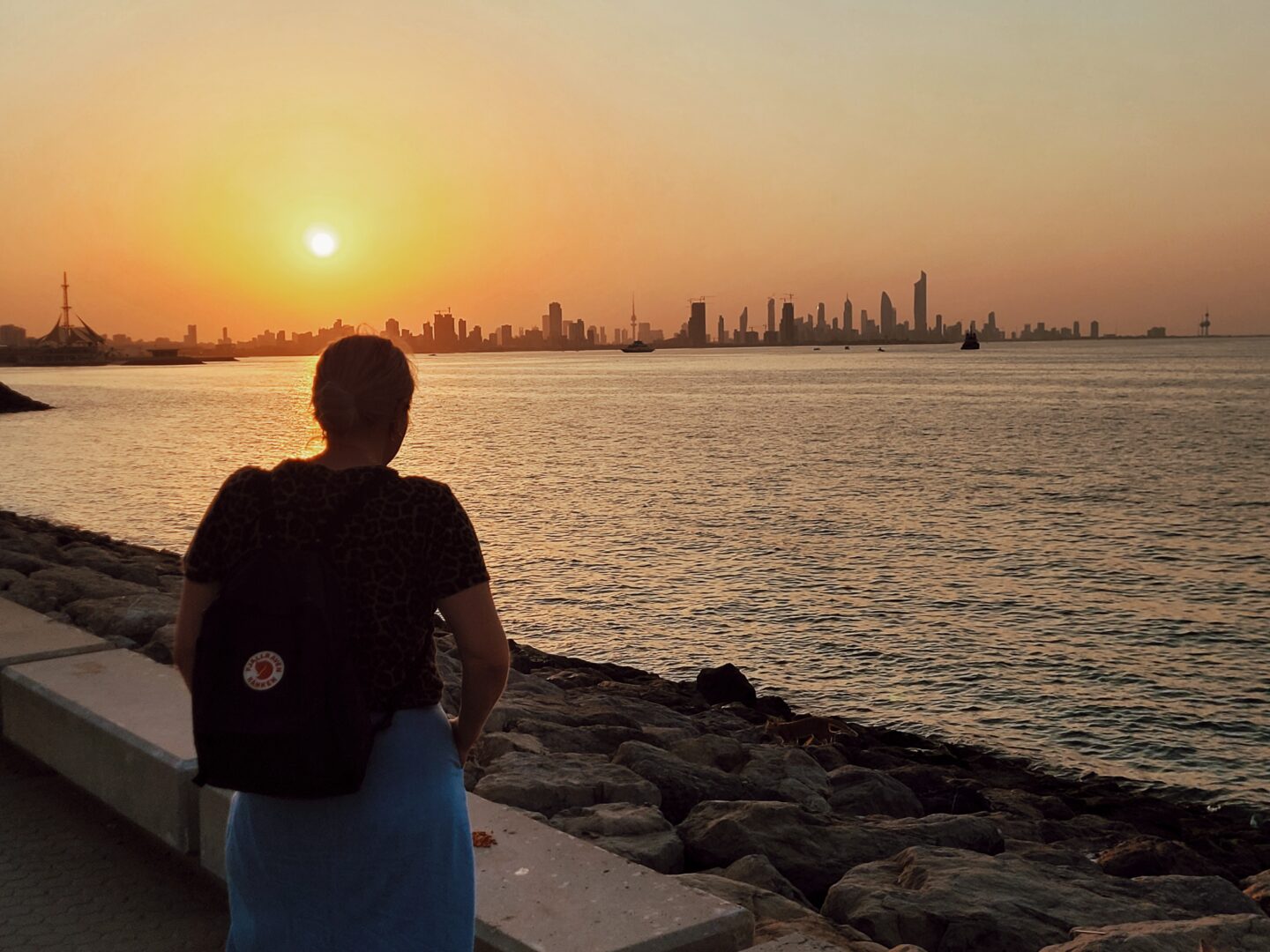