“You win some, you loose some” or “Everyone’s a winner” – which camp are you in? Should kids be singled out and be praised for winning or should they just be doing it for the fun of it? Should they just be contributing to the wider team or should they get the individual praise for the individual achievement? What are your thoughts on this topic, because I am so intrigued by how people/parents view and approach the subject of competition, and more recently or rather specifically as to whether or not sports days should be competitive?

I remember at the start of most school years the head would gather us in assembly and give the same talk about “The parable of the talents” and how each of us should work hard to excel in whatever area we felt our talents lied. We heard lessons about our individuality and doing all we could to make the most of our time in school and attain the best we could. But then fast forward 15 years or so and not only am I feeling rather old, but I am now the parent to school kids and I have realised since becoming a school mum that there is a very big divide in how we should approach competitiveness and attainment in schools, and there is genuine great concern from some about at what age kids should be competing with one another. I write specifically on the topic of sports day because it is a place I have seen big differences in opinions, and to be honest I have also become a little obsessed with asking people their thoughts and experiences over the last few weeks with their kids individual sports days. The verdict? Some of my friends feel it is harsh, unfair maybe, especially at a young age to have “winners” and “looser’s”,  and that we are making them feel inferior in front of peers, where as others are all up for some healthy competition, praising the ones that “win” and at this other end of the spectrum parents often are found to be  far more competitive than the kids, which I find absolutely hilarious to be amongst! Then there are others that felt the non competitive approach their kids school took was rather boring, lacked skill and seemed a bit of a waste of time.

Just last week Ethan had his 1st Sports Day and for us it was competition central…I was most excited and perhaps a little nervous too to see how he would be. I feel that generally he is quite competitive as I have witnessed 1st hand the meltdowns when he has lost pass the parcel or musical statues, but in this athletic scenario I was keen to see if his reactions would be the same, and I wondered how seriously he would take it all, how well he would perform, how he would take to loosing and how he would be with his peers who may be better than him in an event. It was obvious he was very much looking forward to it all, but then what would the day bring emotionally? Was our boy an athlete in the making? winning something would be fabulous of course, but I wasn’t overly worried either if he didn’t. I just hoped he would be having fun and wondered if at 5 years old if he possessed an element of good sportsmanship? 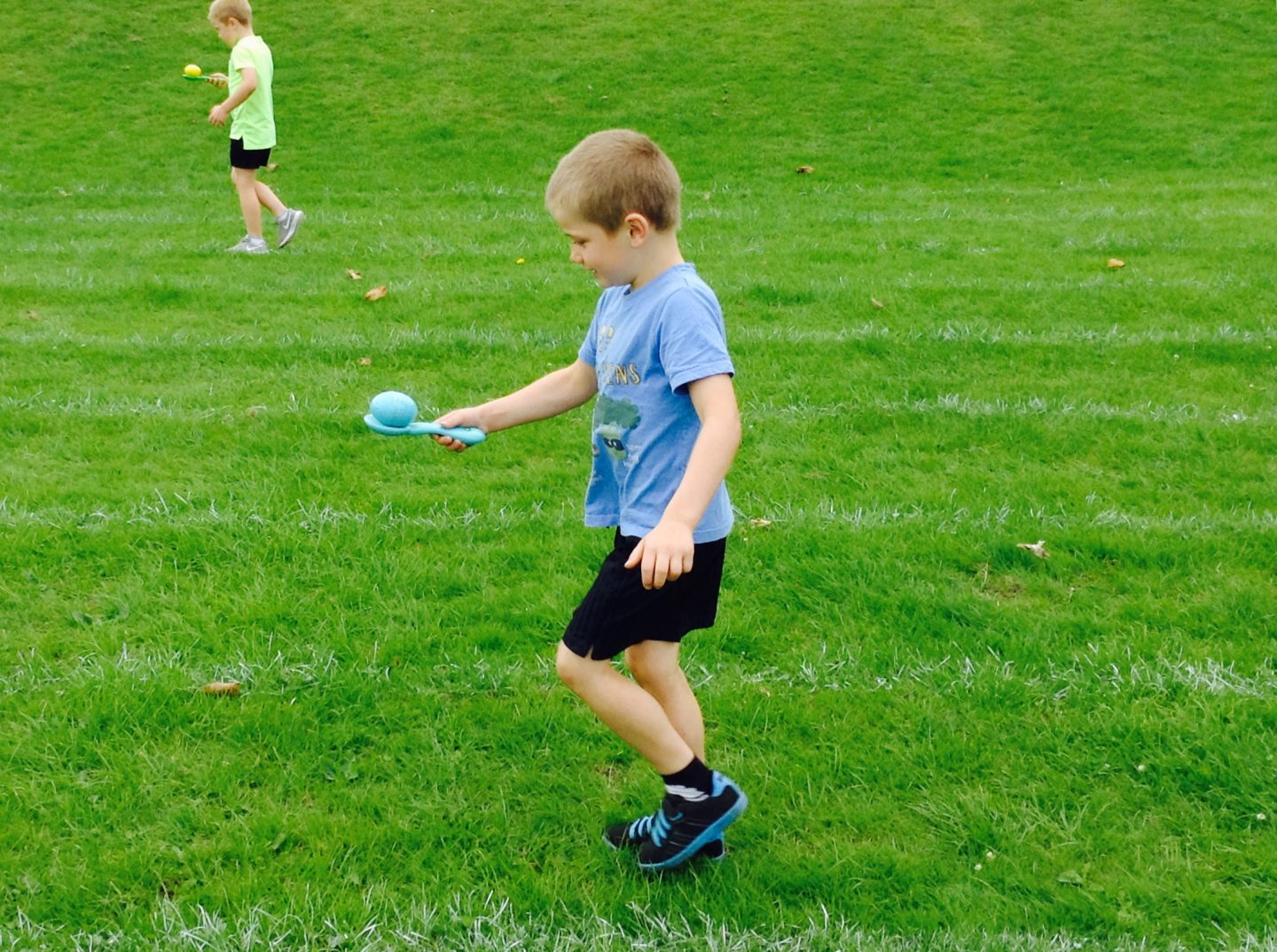 I asked experienced mums in the playground and on the PTA what I could expect from sports day at our school, and I was excited to find out that it was a serious event in the school calendar… an all day affair with deckchairs, picnics, medals and podiums – I laughed and my eyes lit up…I couldn’t wait to see it, be a part of it and witness Ethan giving it his all with his class mates. When the day came we weren’t disappointed; Parents gathered in the play ground next to the field where each house came out in 2s holding hands in their house colours. They then commenced with a brilliant dance routine from Yr 4 followed by a whole school dance routine they had secretly rehearsed, finishing up with the National Anthem… an opening ceremony for the schools “2016 Olympics” with the head wishing them luck and good sportsmanship. I was blown away.. it was fantastic. We then made our way down the field where the kids ran their little socks off and parents cheered, laughed and had a whole load of banter! 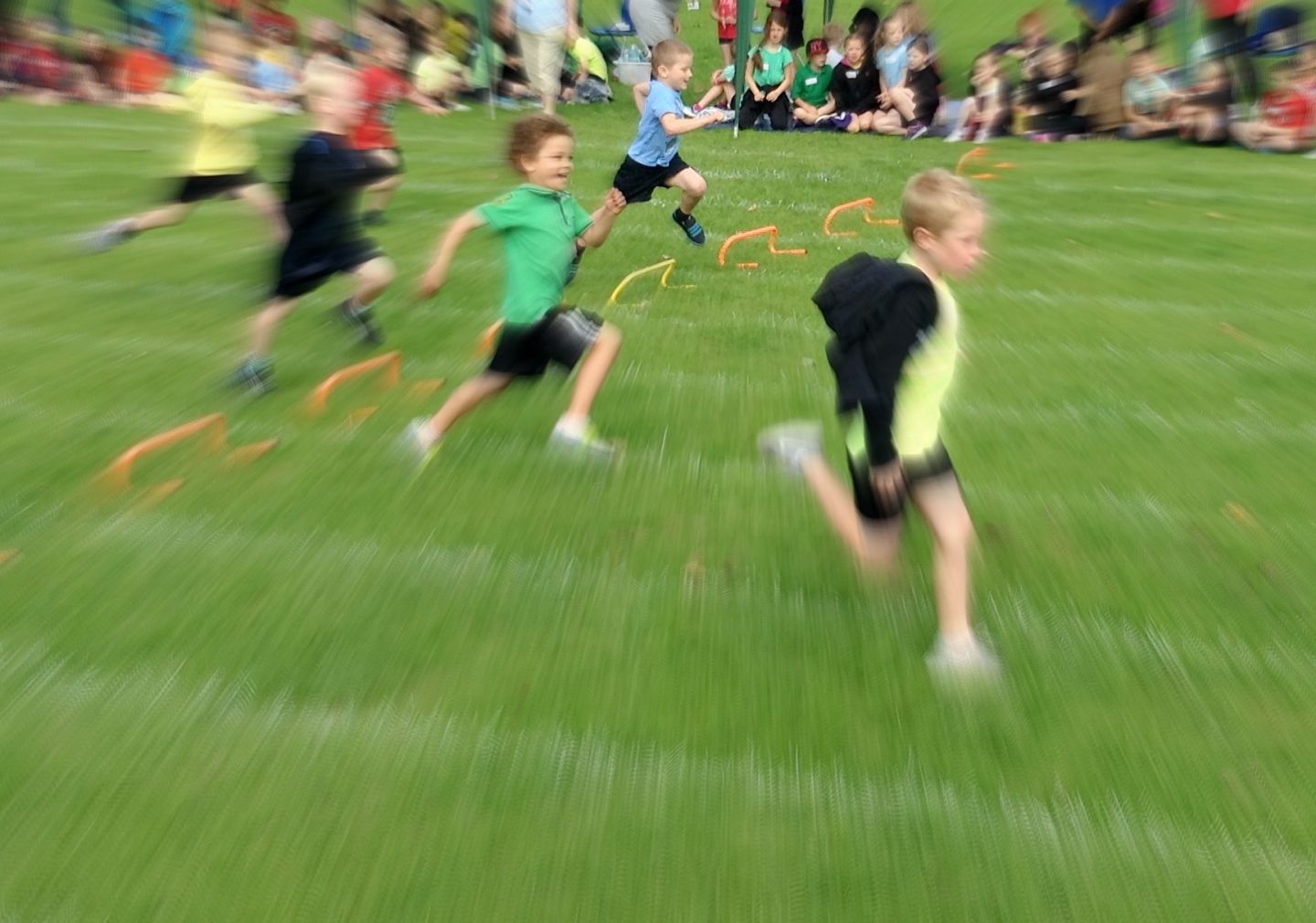 Ethan cheered his friends and was cheered by his friends. Some did amazing in the balance races but not so good in the speed ones, and vice versa… I cheered on our little man at every opportunity with Megsie and he just laughed and loved every moment of it. He didn’t seem disappointed when he lost, and just enjoyed the fun of racing his mates. Of course he was over the moon and beamed (and rightly so) when he bagged himself a silver and Bronze medal from the hurdles and the bean bag balancing races and I loved to see that each child that won had an opportunity to stand on little podiums and have the teachers present their medals whilst the whole school clapped and cheered for them. 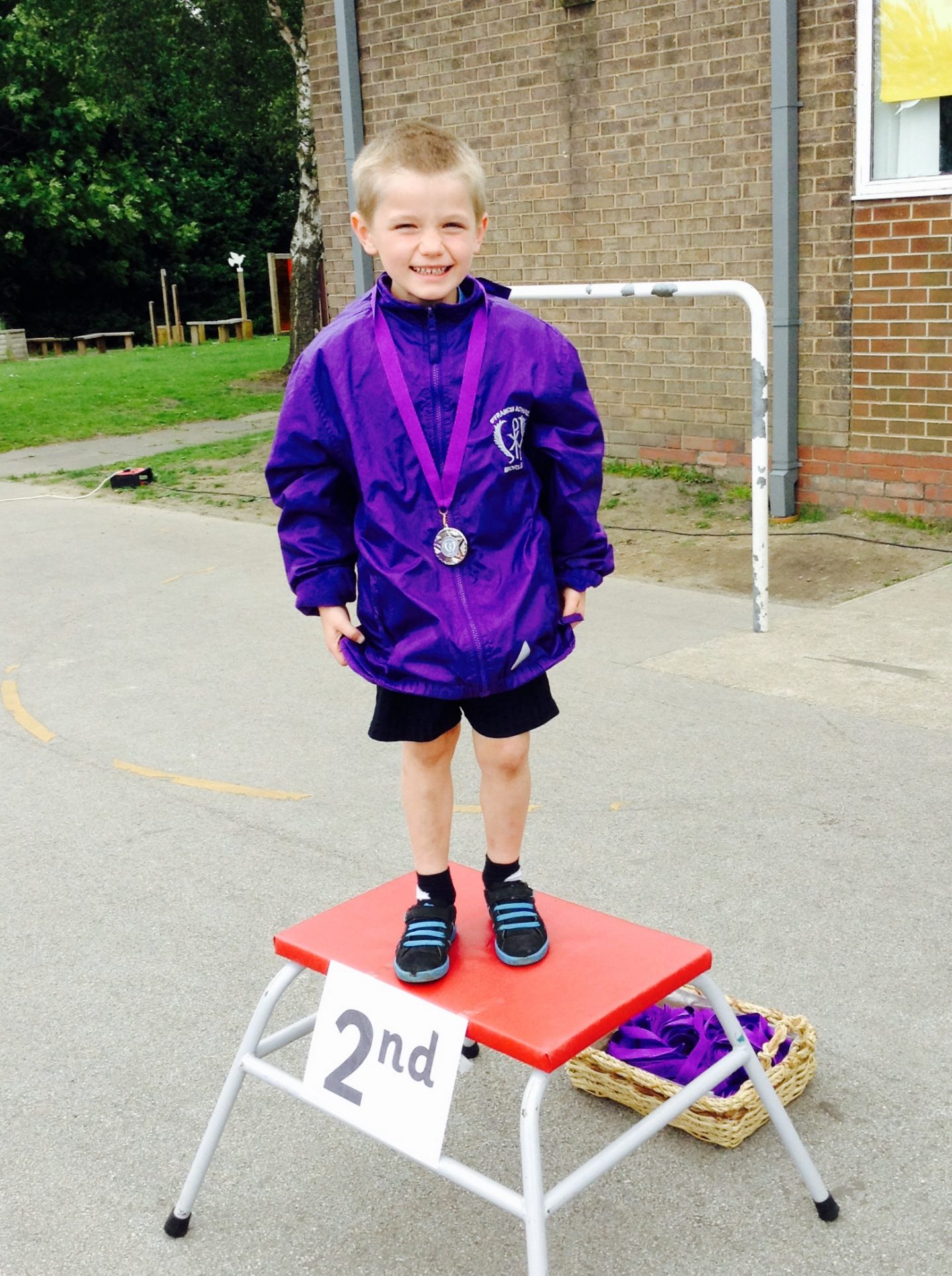 Surrounded by mums and dads cheering their kids on it was evident to see the competitive atmosphere in full swing. We had a lot of fun despite freezing and being rained on occasionally, but best of all the kids were having fun too. They had purpose in what they were doing: (1) To collect team points for their house and (2) they wanted their hands on one of those medals! 5 years old or 9 or 10, I think that it was great that they had an opportunity to participate and have fun, but also to shine in areas they had strengths in and then be recognised for this. It certainly was a lovely thing to see big kids in years 5 & 6 cheering for the reception and other key stage 1 classes.

I personally believe that it is good for them to learn early on that you do indeed win some things and loose other things in life, and you aren’t necessarily going to be good at everything or the same things your peers are, but that you can certainly have fun doing it and feel accomplished for your efforts. You can learn how it feels to be pleased for others that won too and you should most definitely be praised for being a winner or successful.

I feel competition is not only fun and exciting, but that it can help them to want to do better or try harder, and that its good to learn how to deal with disappointments; You can shrug it off or you can cry, either is fine, its hard to loose sometimes, but if you are never exposed to it until later how can you develop resilience? If you never feel the natural joy of being a winner then what will motivate you to be one?

I believe it is important for kids to go up against each other and see who wins, after all ask your kids who the fastest in the class is and I am almost certain they will tell you…why? because they already race each other at playtime, they challenge their peers and compete constantly, but then apparently its wrong for us as adults to set this up on an official day and praise these kids for what they are already good at? Soooo… Is it then wrong to praise kids for out of school accomplishments because another kid doesn’t go to dance or swimming? Is it wrong to hold up a mint piece of art work in assembly to give the kid who did it a sense of pride and for everyone to see some talent? Surely that isn’t fair for those that are rubbish at art? Are music concerts discriminating against kids that know tat about music? And aren’t spelling tests also embarrassing kids who don’t perform well? NO, NO, NO and NO again… every child is unique, every child has strengths and weaknesses and not everyone is good at everything and our kids need to see that thats life. The sooner they learn what their strengths are and what they enjoy, and then how to be pleased for their peers in their accomplishments the better because that is what builds community and character and that is what makes them them.

So I say Yes to competitive sports days. I say let them shine in those sports days if that’s what they are good at, praise them for being winners and athletic because the ones loosing are probably shining elsewhere in the school and are happy that their friends did good just like they were the week before when they were awarded for something. Let them learn the excitement that comes from competition and that sense of desire to be driven towards winning. My kids may or may never be amazing at races and sport. I hope they will be, but they might not. But I can hope they will always have fun participating in things and enjoy the challenge of a bit of competition with friends and whatever area that ends up being in I just hope they will not be sore losers and not too prideful winners, but that they can learn to be happy for others and have fun in all they set their minds to. Life is forever a mix of highs and lows, we can not shelter them from this, but rather we must teach them how to be in each scenario.