Last weekend was such a good one! Not only was it a bank holiday (YAY) but it was also the first in ages that truly felt like a break and a change of the norm. We drove a couple of hours up to the Yorkshire Dales with the goal to have a trek up Ingleborough. Several of our family members had decided to do the Yorkshire 3 Peaks a few weeks ago (which we have done and aren’t ready to tackle again just yet!). We thought it was the perfect opportunity to finally take the kids and do Ingleborough – a mountain we have wanted to take them up for a couple of years now – and then meet our family early evening and cheer them for their amazing 3 peak accomplishment.

And so, we headed up there with a picnic and some excited kiddies (ready to conquer another mountain). It took us about 6 hours with the 4 kids and we covered about 10.3 miles in total trekking up and down Ingleborough from Clapham Village. 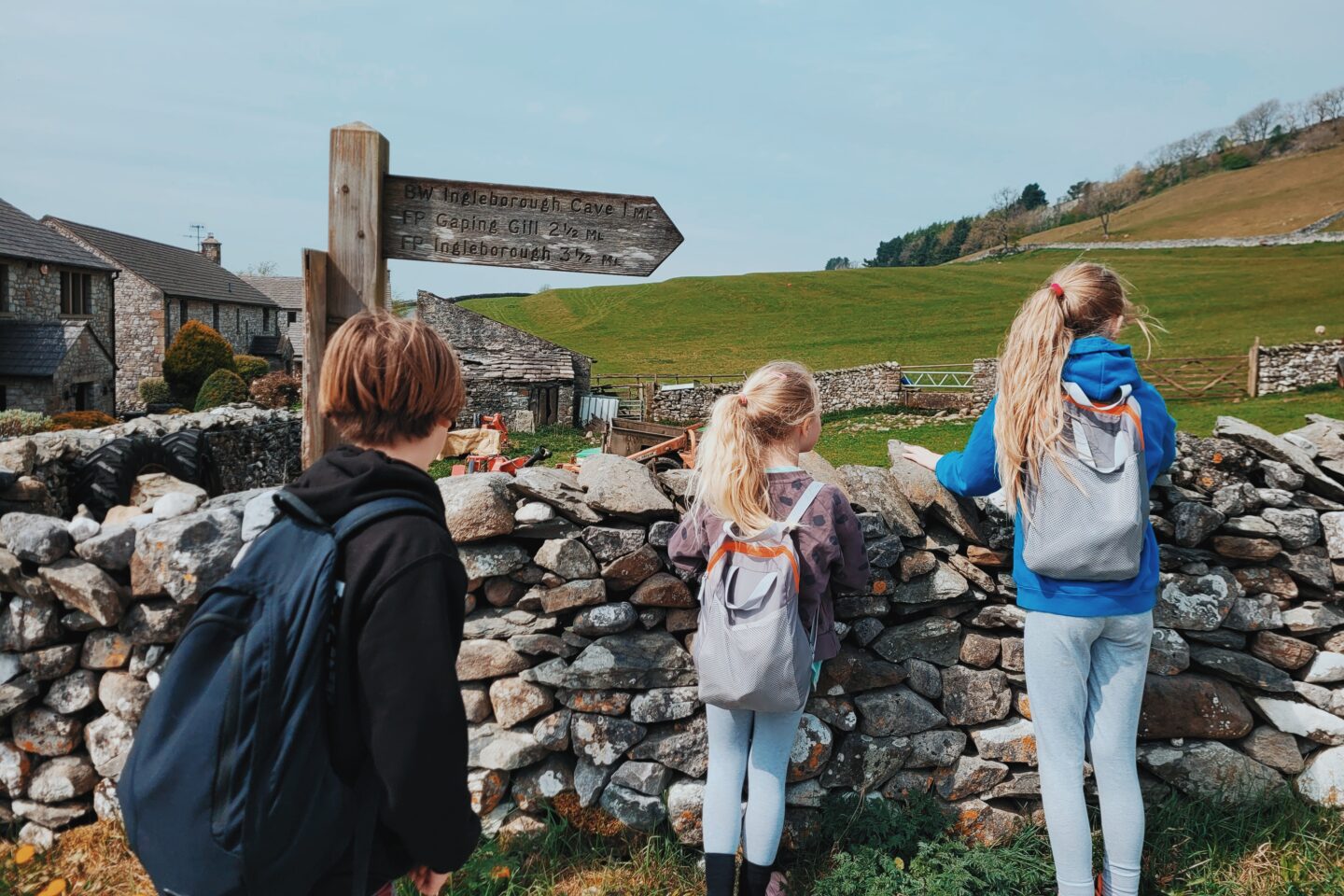 I spent many years of my childhood camping and caravanning in Ingleton and surrounding areas, and Ingleborough was a familiar mountain to us. Until I climbed it a few years ago for our own 3 peaks challenge, I hadn’t been up since being a kid, and since I climbed it then, I haven’t been up again. The kids have only ever done Whernside (twice) and so it has been on our list to do for a year or 2 now.

After much deliberating over which route to take, we decided to opt for the one that starts in Clapham village; whilst it is a longer route (10.3 miles we clocked when we returned) it is much more of a gradual route, and certainly more family friendly for the little ones than the shorter Hill Inn route up which has quite a steep bit at the top, and that requires some scrambling too.

Once in Clapham, there are signs directing you to the mountain, and you pick up a bridleway just to the left of the path that takes you to the cave (though you meet this path further up). The bridleway takes you up the valley, through a farm, down the hill and past Ingleborough cave, an amazing limestone cliff and then over a style and along a flat route to the base of little Ingleborough and walk a little ways to the summit.triangulation point. It is really well maintained and not too difficult (minus the small steep bit where you walk down to the valley bottom, and also where you climb up some rocks through the limestone). From here it gets a little more intense as you begin the climb up the mountain (it has a very well maintained path/stone steps) and then make your way along the top, a little bit more of a climb and then BOOM – you’re at the top of Ingleborough. It is such a pleasant route up and down, and one that all our kids handled really well. I had Oscar on my back, which added to my slower place climbing up (as well as burning legs), but otherwise it was totally okay and manageable! 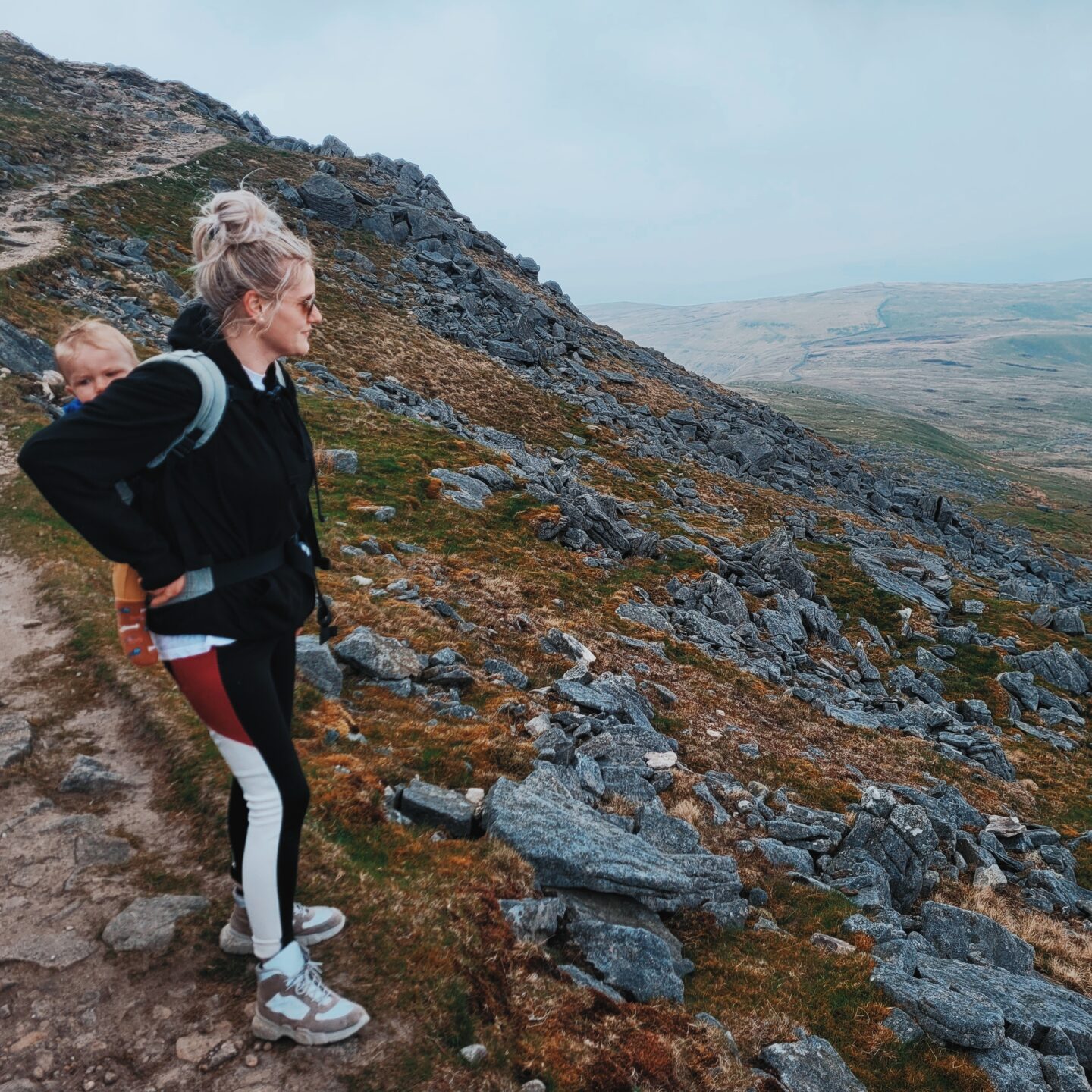 The views were incredible (even though it was a little hazy), but once at the top it was absolutely FREEZING and began to rain a little, which was a complete contrast to the warm sunny weather we were enjoying down in the valley! This of course triggered emotional outbursts and whining from the youngest 2, as we hadn’t packed as many layers as we probably should have! Aside from that 20 – 30 min wailing sess, the hike was really good, had incredible scenery and views, and it felt utterly amazing when we arrived back down to have the satisfaction of conquering another mountain with the kids.

It was certainly a Saturday well spent; that fed my soul and made some fab memories for us as a family. 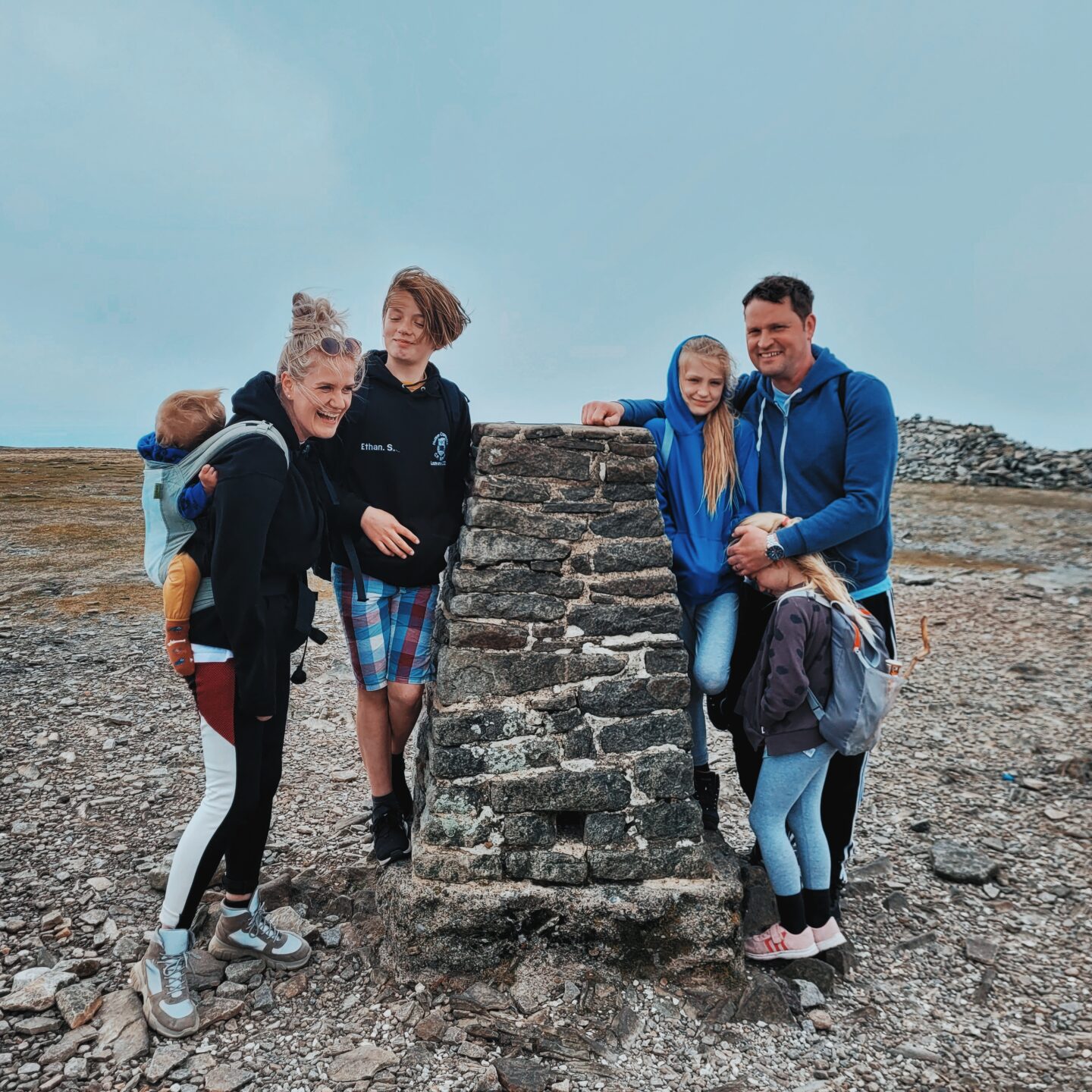 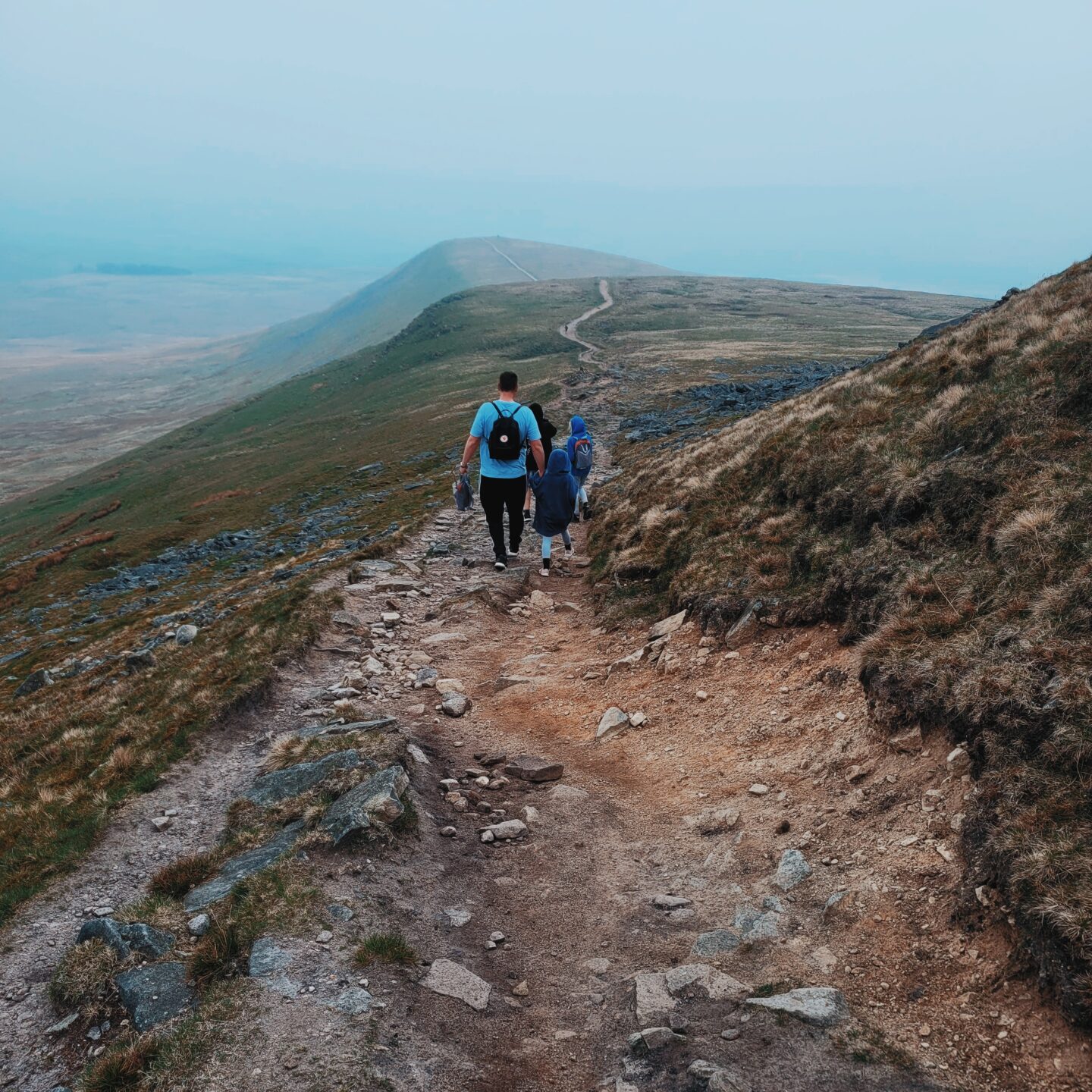 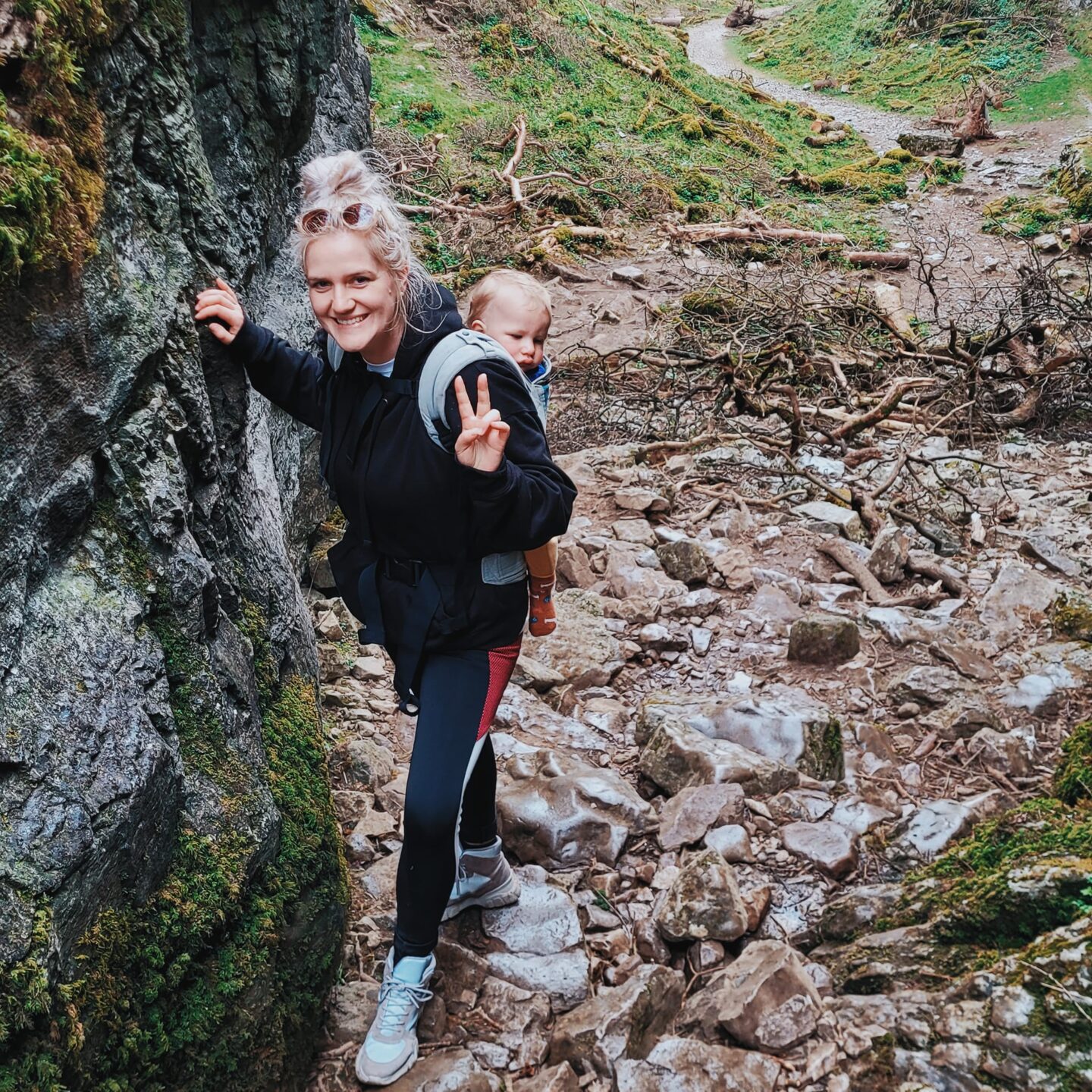 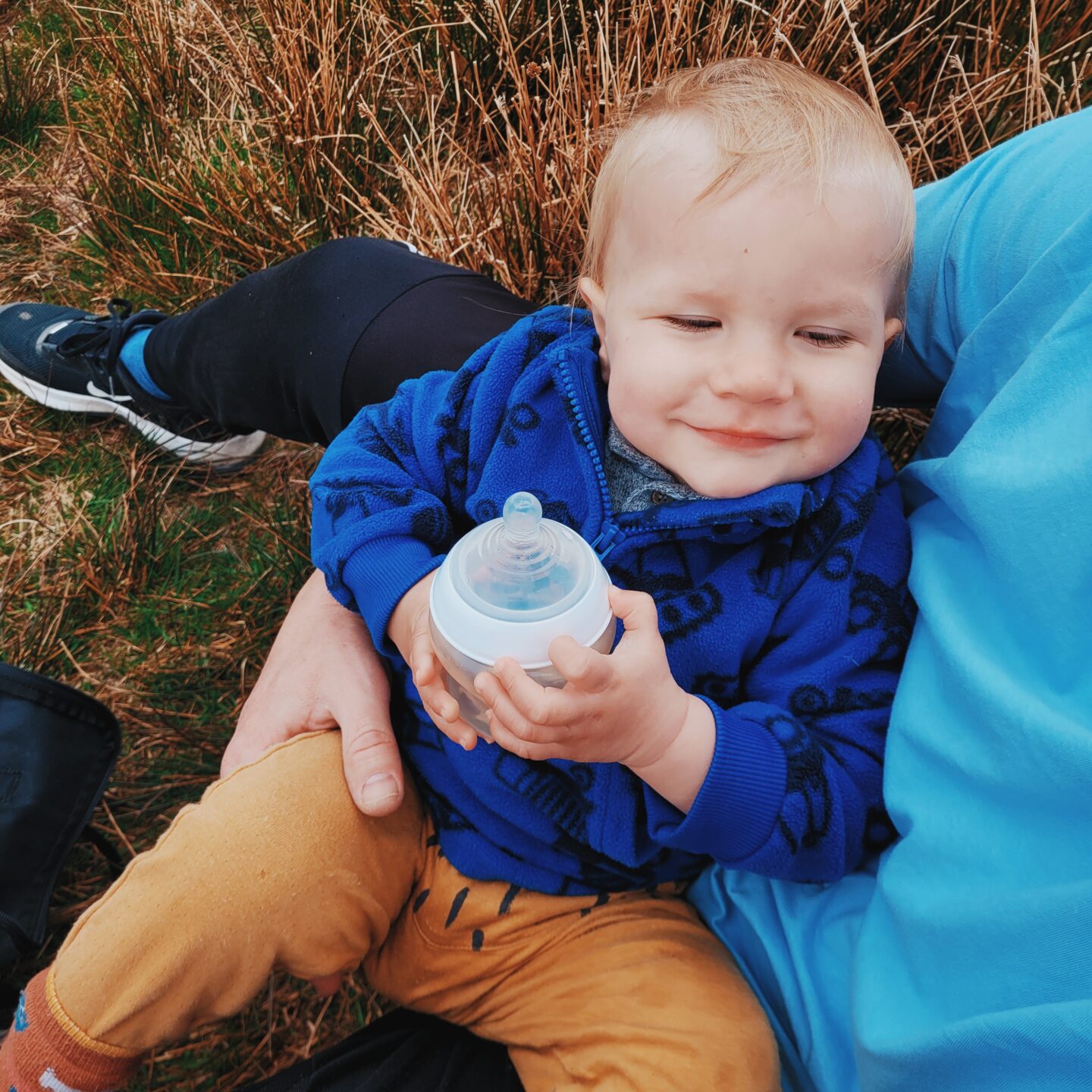 Ingleborough is the hardest of the 3 peaks I would say, and often has the most unpredictable weather on it. As I have been up it a few times since being a kid, we didn’t feel we needed a map and compass, but if you aren’t familiar with the area, I would 100% suggest you have these with you (or someone who knows it well). As we experienced, cloud and rain can quickly ascend on the top, and very easily can cause you to be disorientated and struggle to find the paths down. Don’t let this put you off though, it is a great hike and one both we and the kids loved! I would also suggest with kids that you pack more snacks and layers than you think you will need…I am glad I put Oscars fleece and an extra satsuma in the bag last minute, but could have done with gloves and a hat once at the top, and something more substantial at 6pm on the way down!