Stockholm consists of a cluster of diamond islands and is located on the east coast of Sweden, at the entrance to Lake Mälaren. Its name means “city between bridges”, and it is one of the most beautiful cities in Northern Europe; with palaces, gardens, exquisite buildings, imposing churches, and many museums and bridges that characterise it as “Venice of the North”.

It’s historic centre is called Gamla Stan and spans three islands: Stads, Riddar and Helgents, and the beautiful medieval buildings that survive to this day are because this city was not bombed during World War II. The only damage it has suffered from time to time was from fires, as almost all of its old houses and buildings were made of wood. At the beginning of the 19th century, everything was demolished and rebuilt with stones and bricks in a medieval design. Essential sights in the Old Town are also the Opera House, the Parliament and the oldest square in the country.

As you look to plan for 2022, it may well be a place to add on your travel goals. Here are some ideas that will help you to truly capture and experience it to the fullest.

Before you start ploughing the city, why not have lunch here – the real institution for the Swedish capital. This is a wagon in Södermalm square that has been serving fresh fish to Stockholm residents for over 20 years. Skåning, a portion of herring on rye bread topped with Spanish onion, fresh dill and mustard, is adored and a “classic” choice to get you tasting delicacies from this part of the world.

Guided tour under the bridges of Stockholm

The continuation of your acquaintance with the city requires contact with the waters to really experience its complex island structure. This tour lasts about two hours, crosses a total of 15 bridges and reaches the confluence of Lake Mälaren with the Baltic Sea. It will provide ample opportunity to admire the architecture, with its deep yellow and terracotta tones all the way.

Parks and gardens cover 1/3 of Stockholm’s area, but what really stands out is the Rosendals. It was created on land granted by King Oscar I from his palace on the island of Djurgården. According to the Swedes, boats to the island are widespread, with the Rosendals (“Valley of the Roses” according to the Swedes) at 15 minutes from where the boat runs aground. Various products are sold in the area’s cafes, bakeries, and groceries from the local organic garden. With a huge portion of chicken salad and a slice of the classic local coffee cake, you can sit down at a table or have a picnic on the grass.

Since the famous 1993 robbery of Picasso and Braque worth a total of $66 million (and methods borrowed from a French film), Moderna Museet has been completely reorganised under the supervision of Rafael Moneo. The halls house the permanent collection of Swedish and international art works; including important works by Picasso, Matisse, Dardel and Hjertén and a place I would love to see. The Museum of Architecture (one of the largest in the world) occupies an adjacent colossal hall.

Upon leaving, you can also spy on the Kastellholmen turrets above the tops of the trees. What a place!

In the Old Town, you can take refuge in the Royal Coin Cabinet – a majestic clay building right next to the palace. In fact, it’s a hidden treasure. Many ancient coins from Baghdad and its environs came to light in Sweden, as well as ancient English coins, making Sweden more prosperous than England itself.

The Royal Coin Cabinet houses the largest coin in the world, an imposing copper plate of about 20 kilos dating from 1644 and the first banknote in history, issued in 1661 by Stockholms Banco. An intriguing place indeed.

Beautiful and completely picturesque, Stockholm not only has a lovely landscape for photos but also has a culture that you can very quickly embrace. Where Nature meets design, against the backdrop of the Baltic archipelago, this city is full of surprises. Although it bears the title of Ice Queen, in Stockholm, the streets are so lively that the ice melts. Known for its innovative style, its unique flavours, and creative concern in its museums, the city that embraces the culture of “fika” will enchant you in the first 24 hours. Discover it more through renting a vehicle, which you can get through a company like Enjoy Travel, which offer a wide variety of cars to choose from and incredible and economical offers. 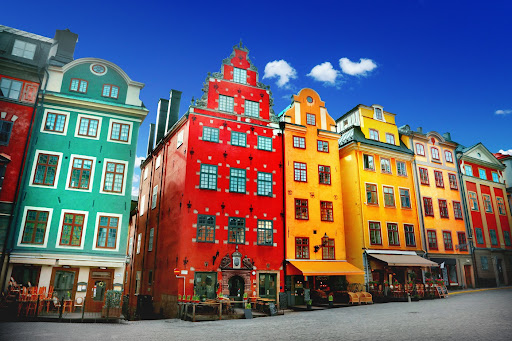