Last week we had a thoroughly enjoyable ‘vaca’ for our “summer holiday” at Lake Garda and surrounding cities in Northern Italy. We had a base at Altomincio in a Eurocamp caravan which I picked up for a bargain and which was a lot of fun and turned out to be a great place for all. 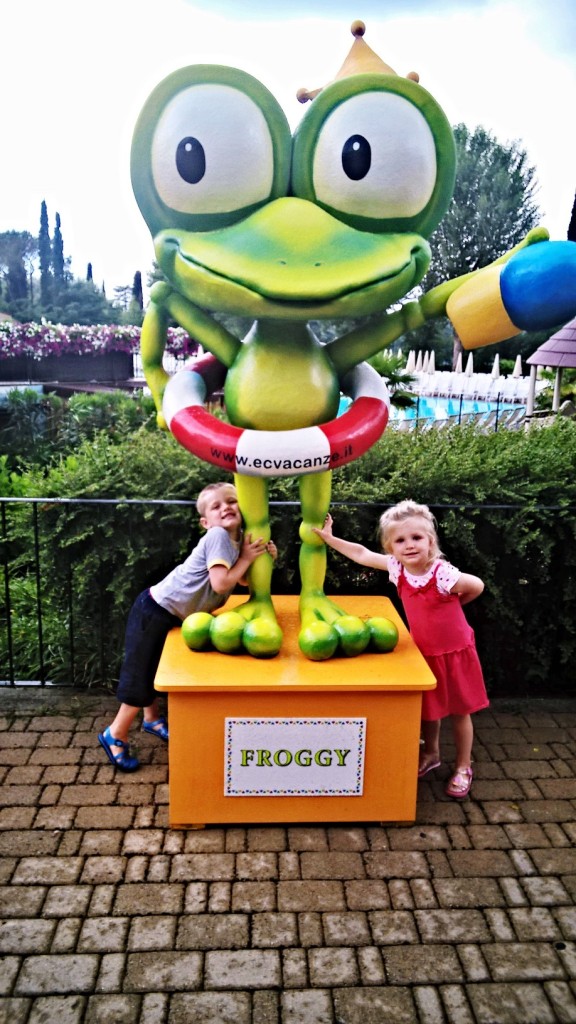 I cannot believe how fast this last week has gone, we returned home from Italy in the early hours of yesterday a little more tanned (Yes) , probably a little heavier with all of those ice creams (I darent check) and absolutely wrecked from fun packed days in the sun! Holidays definitely go way too fast and I think when you go away with kids, whilst having had a blast, you tots need another without them to recover! They were both really good at travelling, loved flying and enthusiastic throughout. I took plenty of snacks & a few toys/mag each both ways to keep them occupied which seemed to work well and the flight passed quicker than I anticipated! Once in Italy though it seemed to be whine central…it was too hot, or they were tired or they wanted to go to kids club or the best “were hungry” (I felt I was constantly feeding them) but overall  our tiredness comes from all of the amazing things we did together and despite whiney days and at times little cooperation, we all had an absolutely brilliant time. 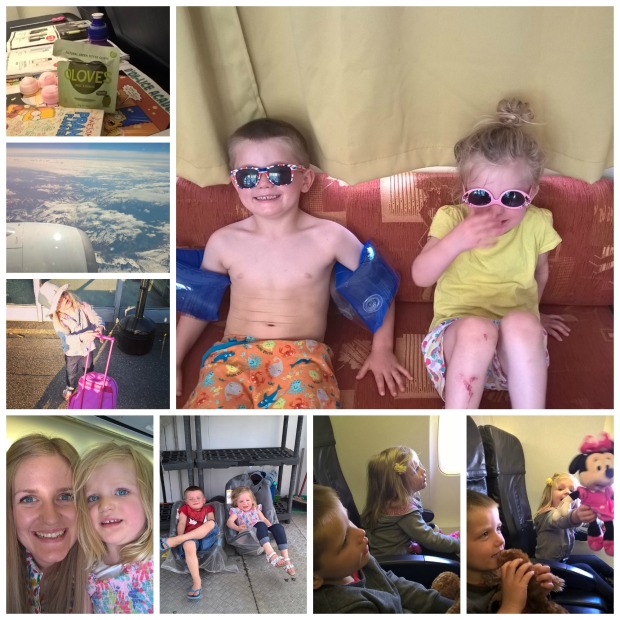 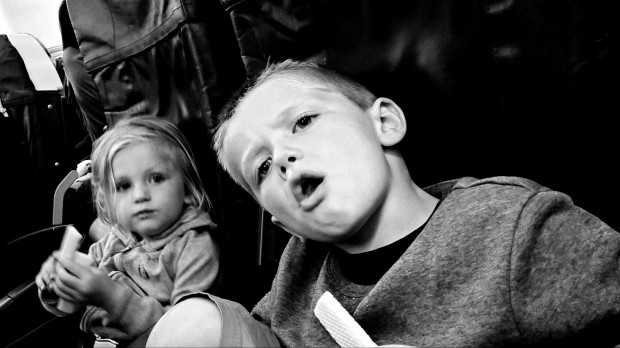 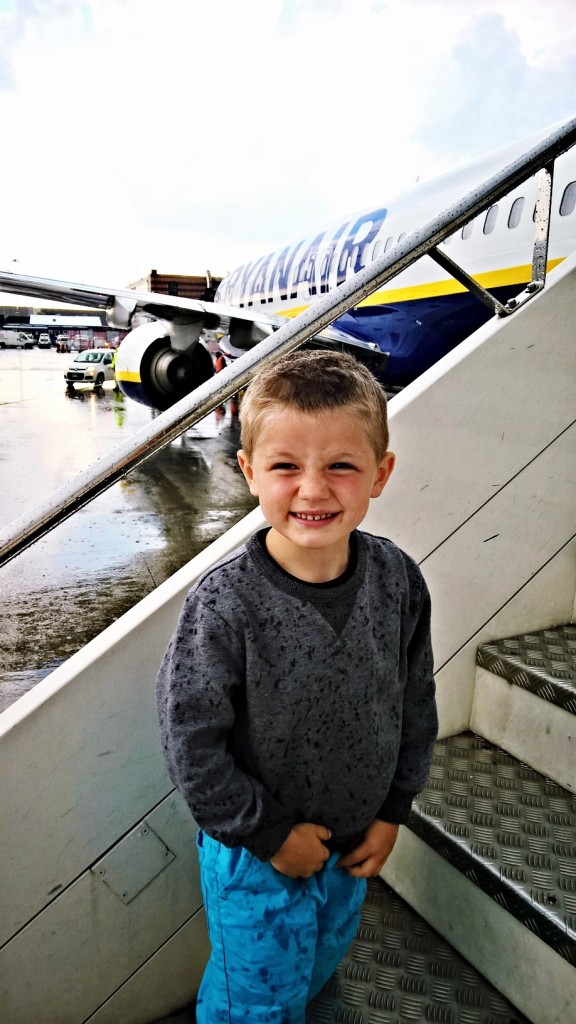 I really wanted to love Italy as its been on my “top 5 places to visit” list for years – I so much hoped it would offer all I imagined, and after a couple of days of exploring and eating I realised it was everything and more. Lake Garda is a massive tourist destination but some how maintains a chilled traditional feel. It certainly not only met my expectations but exceeded them, it was beautiful, entertaining well preserved and tasty….initially I found the caravan to be a bit of a let down but only because I was comparing it to apartments, hotels and lodges we’ve previously resided in on holidays, and after a quick “its camping Mary, what did you expect?” From Nath and as I saw the kids go nuts with joy over their caravan bunkers I just began to love it (and was grateful it wasn’t a tent and that we had beds, A/C , bathroom & kitchen). 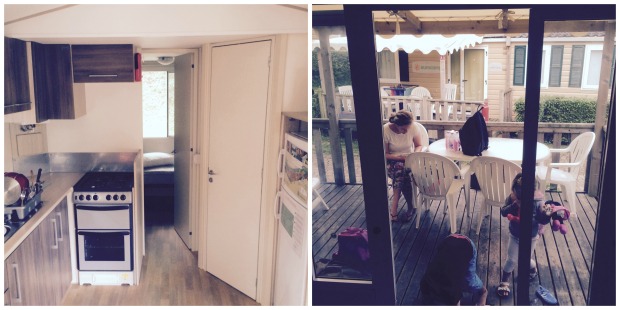 I realised how brilliant it was we could see all of these beautiful places, have amazing on site entertainment, lovely staff, activities  and facilities and have a camping adventure with a small price tag! I decided about the second day there that with kids, Eurocamp is the way to go…they can be themselves, get messy, have fun and adventures and its a very fun environment for all. It also means as a family you can experience so much more of the country your in because it keeps the cost of the holiday low…Rich experiences, small price tag? Suits me to a T! 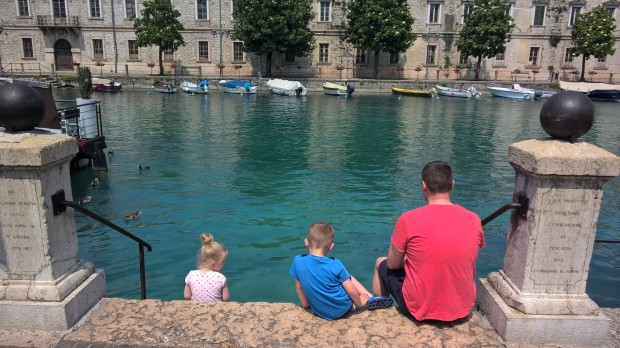 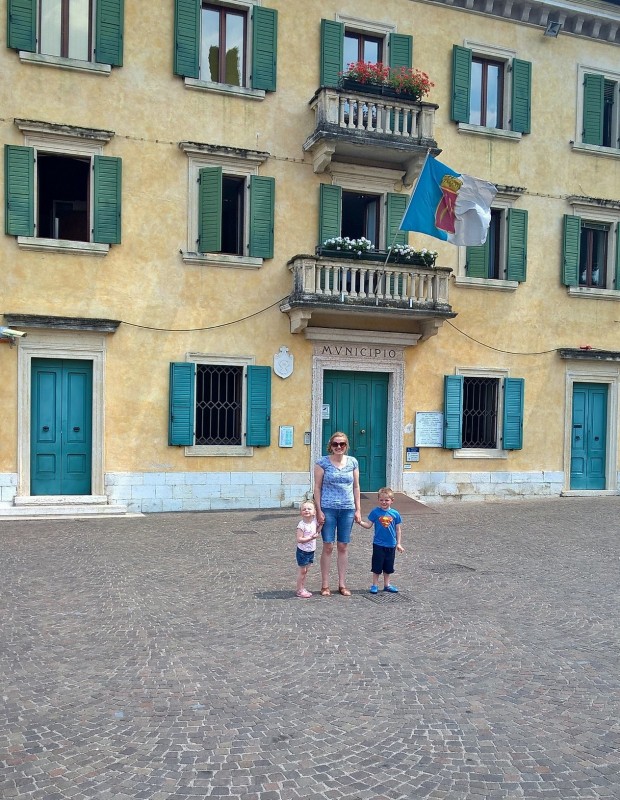 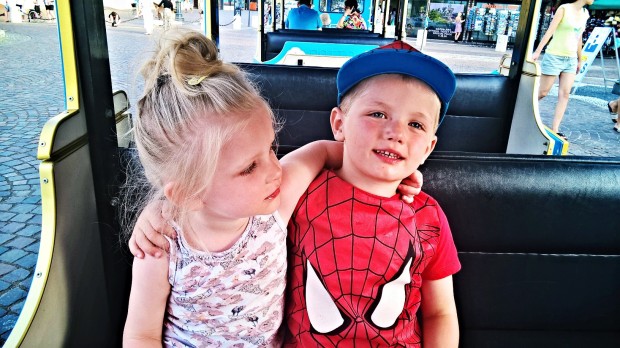 We enjoyed some lovely days out to various places around the lake the highlights being Verona and Venice (more deets coming soon), ate amazingly well (deffs deserves its own post) and thoroughly enjoyed the day we hired a pedalo on the lake. The lake was beautiful with rugged mountains surrounding it and turquoise waters. Most days, particularly the one we spent on the lake were glorious sunshine and clear skies. You can rent various boats all over but we felt that a pedalo with slide was the way to go with young kids, it was only 12 euro for the hour and the kids were loving their life! They were surprisingly fearless and jumped straight in, the water was so lush and it was such a great time together. I could have swam all day in the lake …just beautiful! 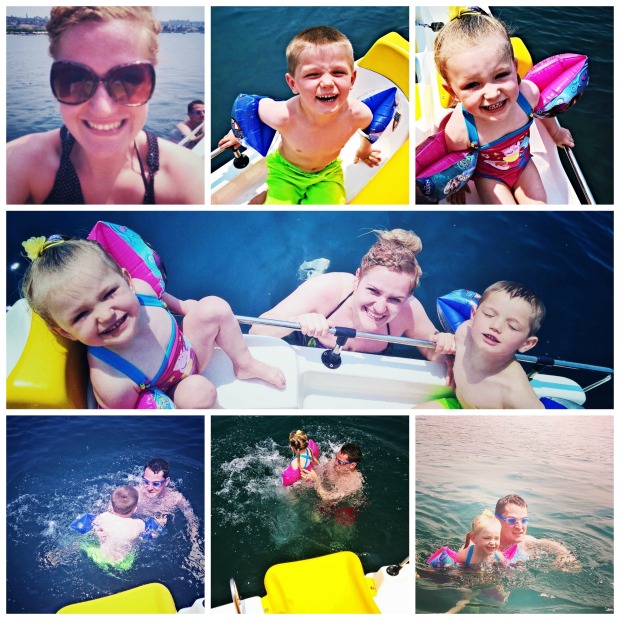 The rest of the time we were more than Content staying on site and making the most of the amazing facilities and spent most mornings to mid day by the pool…the slides were amazing and the kids couldn’t get enough of them, the flute was super fast and I screamed EVERY time but their fave was the rapids with “8 pools” , it was mental and they never seemed to tire from it. We had numerous hours of fun sliding down – we raced, splashed, paddled, relaxed and laughed for hours on end, it was beautiful, hot and perfection! I love to have fun together and we certainly did a lot of that. 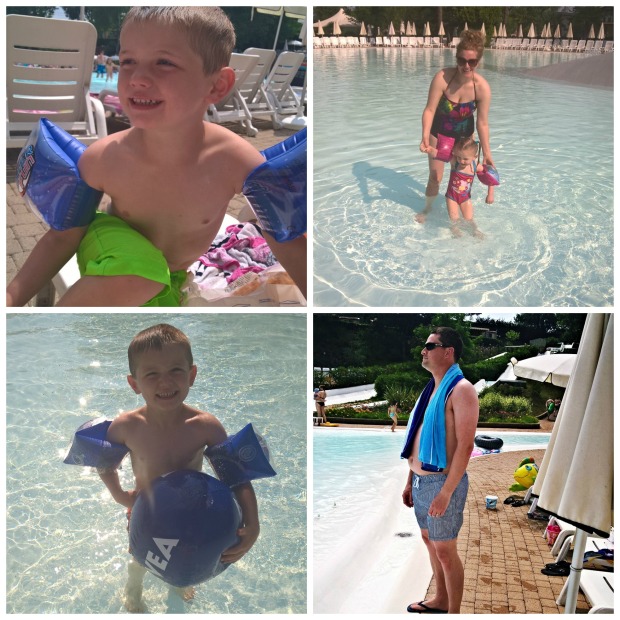 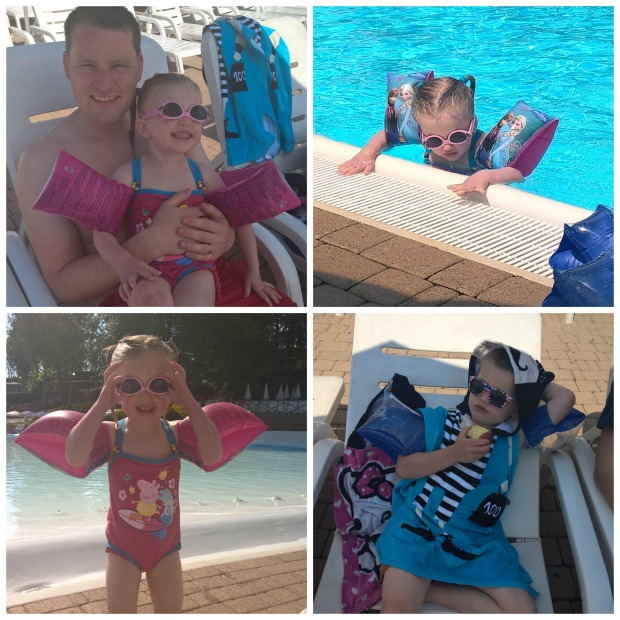 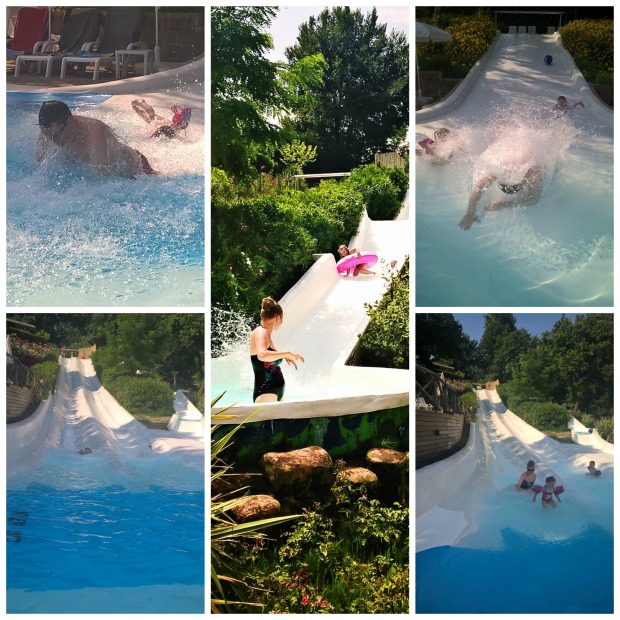 We considered the local water park that Nath went to as a kid and that his family talk about ALL of the time, but when we saw and experienced the amazing pool facilities on site and considered the ages of the kids we decided not to bother…but we did buy them an inflatable ring to make optimum use of the slides we were lucky to have on our doorstep and I may have used Megsies several times to gain top speeds down the flutes and rapids – Oh my was that fun! I even tried a little aqua dance and aqua gym in the Olympic pool (when I wasn’t being a celeb soaking up some rays) which was part of the onsite “entertainment & activities” and I found that a lot of fun, by midday the kids would be dancing in pool for the daytime “mini disco”…So much fun and so much relaxation in one place.

At night the kids rocked out again at the “mini disco” and it gave us great joy to see them
having so much fun and being so energetic (it also became a great negotiator when they were uncooperative or whinging!). Each night Nath and I would sit and laugh at them and bop along to the cheesy tunes and by the end of the week were saying how we should do this every year whilst the kids are young – they were beaming and had wikid moves! 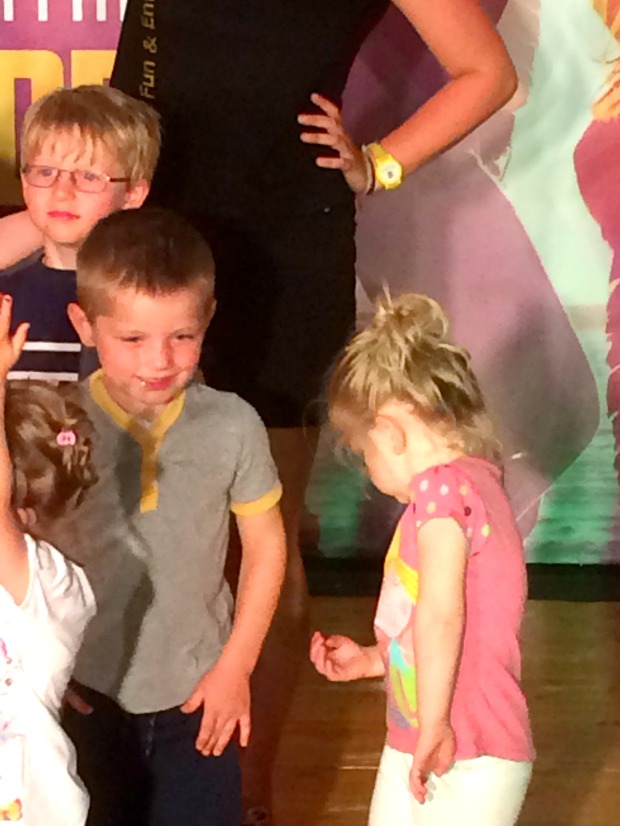 Part of the adventures came from renting a shed of a car  for the week. Having a car was a necessity for everything we wanted to do and also for general ease with the kids, but we found driving in Italy to be absolutely nuts…not just because we were on the other side but for many reasons. The short journeys were bearable  but on longer ones (to Verona and Venice) it was scarier than a roller coaster; they get soooo close before over taking, over take on blind bends, straddling lanes on motorways, pull out without giving way to traffic or indicating and generally way to close to the vehicle in front…im so glad Mr Smith drove as we quite possibly wouldn’t have survived the experience!! Be warned if you ever drive in Italy get a bigger car and be on guard; they are aggressive, all over the place and park wherever they feel like. 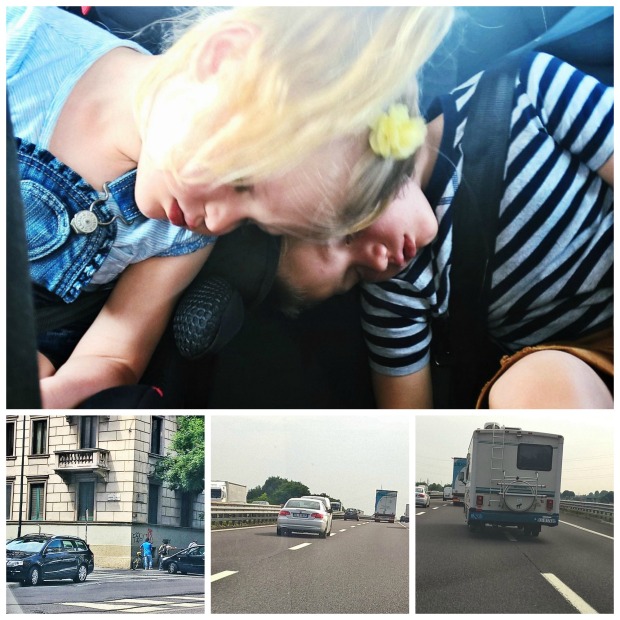 Our last adventure was found in Milan. As we were flying home from Birgamo (North Milan) we decided wed have a few hours in Milan prior. In hindsight this was a BIG mistake as the kids did not cooperate very well in a busy city, with heat and walking, combined with getting a little lost for a bit It literally was a flying visit and something we maybe shouldn’t have attempted at that point in our holiday (take note if you are ever in Milan the metro to Duomo will take you directly to the main square) Nathan and I enjoyed it but decided we would keep city visits for us (until the kids are old enough to appreciate it). 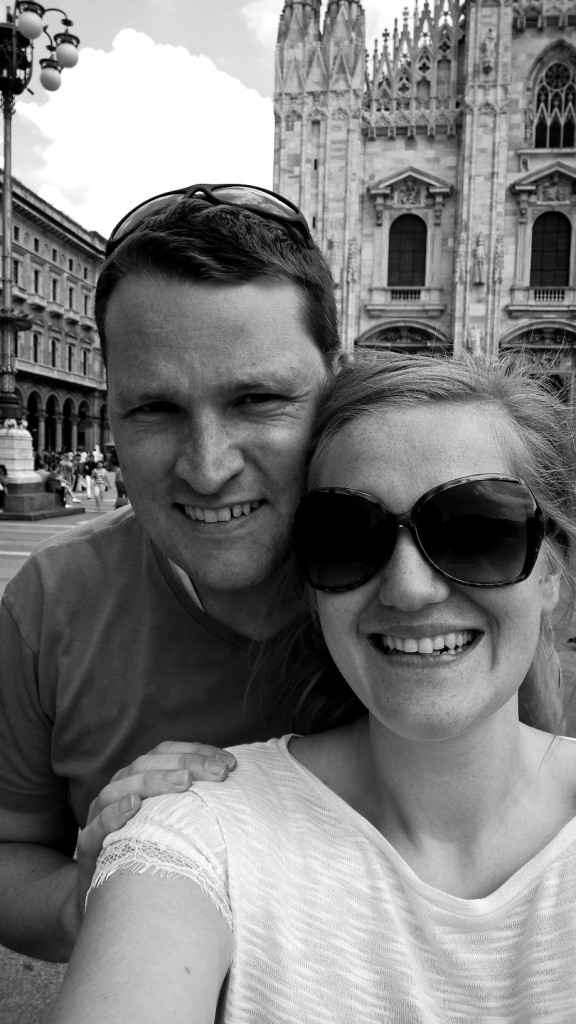 Milan is like no other city I’ve been to, of course the centre is amazing and Metro like most other European cities, but the suburbs have an almost American feel with the apartment blocks lining the streets and laid out in a block like formation, yet at the same time its SO green, parks and trees lining streets everywhere – 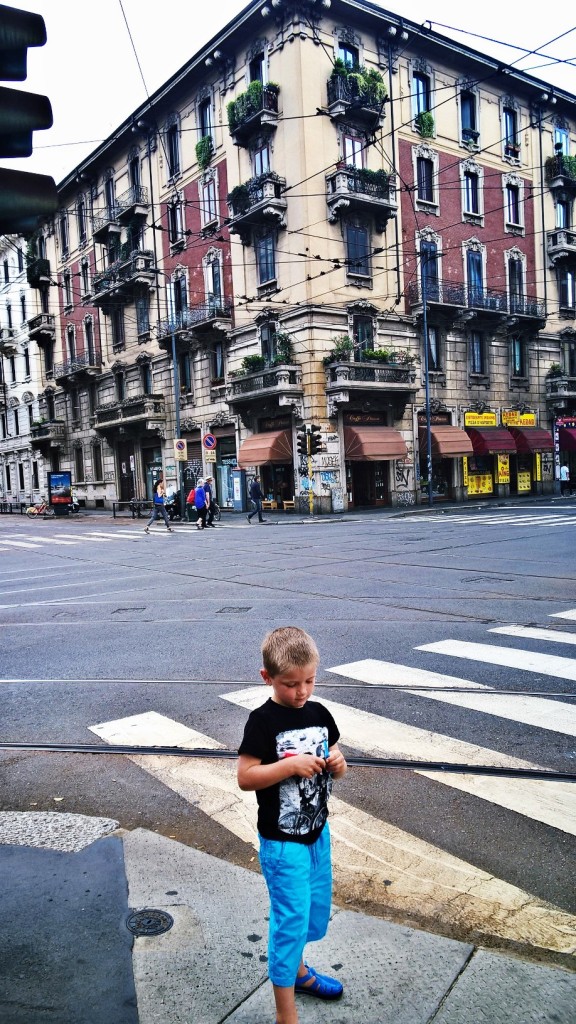 and then out of the blue you see people showering in the street?!(note suds) 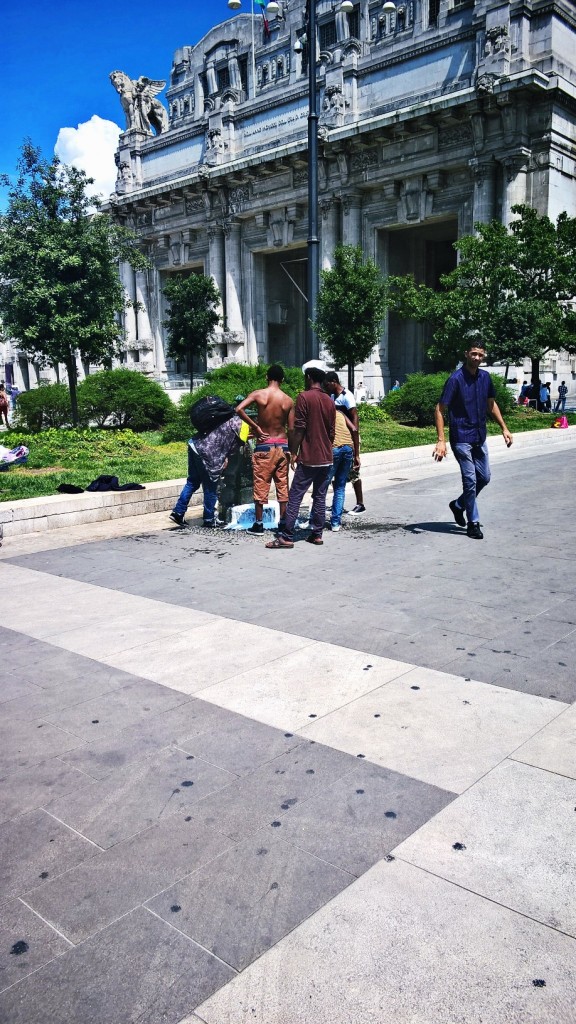 The amount of designer shops screamed “fashion capital” and it was mad! Gucci had a cafe? and Mercedes apparently sells apparel! I’ve never seen so many large price tags under one roof! I like to look good and “cool” but I’ve realised that I am not super into fashion, I think that if I was more so I would have been going a little more nuts about being in Milan… I appreciate some trends but if I like it, its colourful a little funky and “me” I wear it (on trend or not) amid Gucci, Prada and designers I never even had heard of I was most excited about H&M and seeing some of the cool stuff they had in!

The main square and cathedral were beautiful; tourists everywhere of course, along with street sellers, performers and dozens of pigeons – this seemed to be Megan’s fave part of Milan as she took the opportunity to chase birds and generally go nuts. 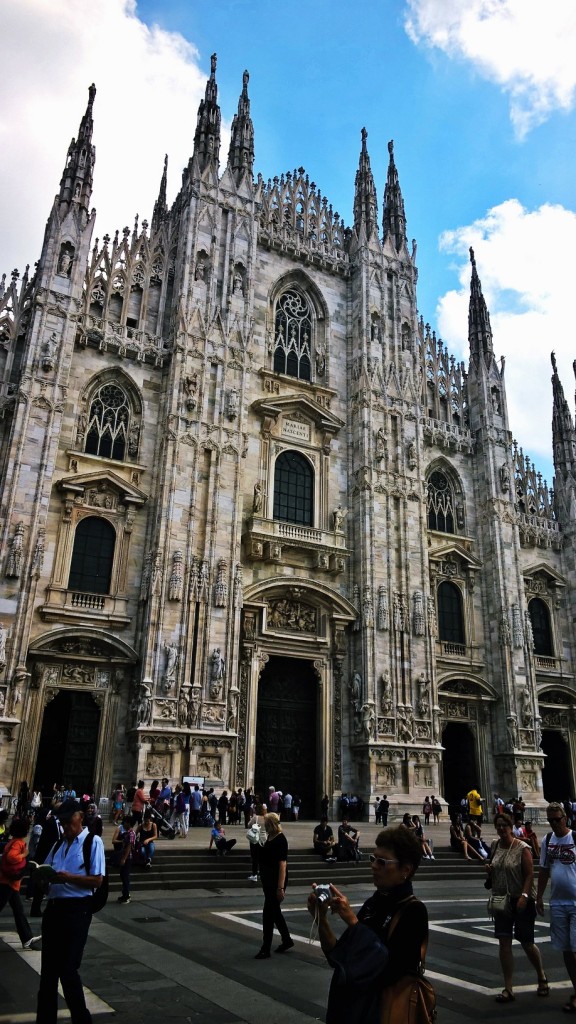 Ethan only stopped whining when we were on the Metro, unlike Megan (though she doesn’t remember) he’s never been on the underground and found a train under the ground to be the greatest thing ever! 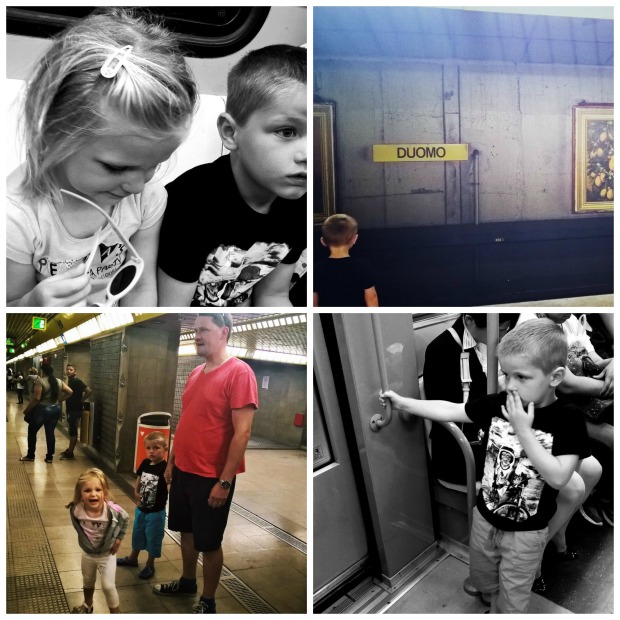 On the 1st day of our holiday as Megs Legged it up to the rapid slides she excitedly turned to me and said: “mummy Italy is way better than a birf-day party”, I responded with “yup, because on holiday everyday is a party”! That small convo with my newly turned 3yr old pretty much summed up or holiday to Italy – every day was a party, every day was fun, everyday we counted out blessings for such a wonderful opportunity to be in such a beautiful part of the world, 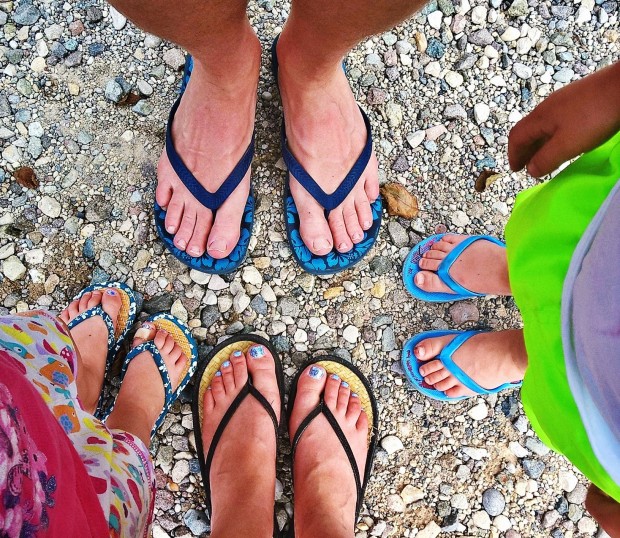